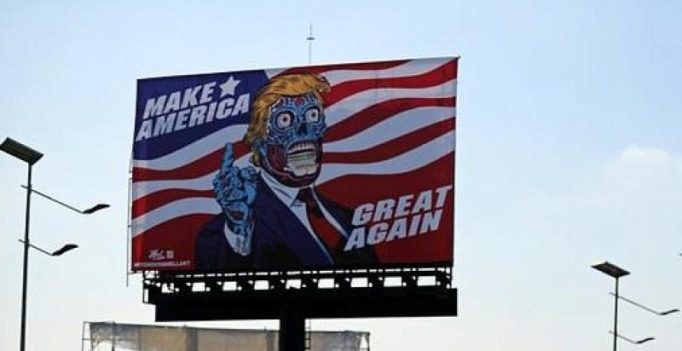 A billboard by US artist Mitch O’Connell depicting President Donald Trump displayed in Mexico City is in allusion and tribute to John Carpenter’s 1988 cult movie “They Live”. (Photo: AFP)

Mexico City: His skin is blue, his face contorted and his eyes bulge from his head, but the hair is unmistakable: that alien in the giant billboard over one of Mexico City’s busiest roads is Donald Trump.

In case the US president’s distinctive blond swirl didn’t tip you off, the artist has put an American flag in the background and framed the whole thing with Trump’s campaign slogan: “Make America great again. Ironically, this extraterrestrial Trump has landed in Mexico because he could not find a home in the United States.

American artist Mitch O’Connell created the work in 2015 for a horror film festival in Chicago headlined by the 1988 cult classic “They Live.” But what began as a publicity poster turned into a zeitgeisty political statement, he told AFP.

“I was drawing a poster of the ‘They Live’ alien and the TV was on my drawing table. There was Trump, campaigning or doing something on television. And that hair is so distinctive. I’m looking at my drawing and at his hair and I said, ‘That hair would look fantastic on this alien,'” he said in a phone interview from Chicago.

“They Live,” a satirical sci-fi movie starring late pro wrestler “Rowdy” Roddy Piper, is the story of a drifter who discovers a pair of sunglasses that enables him to see that Earth’s ruling class is in fact made up of aliens who manipulate people via the mass media to spend money and accept the status quo.

O’Connell said his 21st-century take on the film resonated at a moment when reality TV star and real-estate billionaire Trump was starting his improbable rise to the presidency. “Reality kind of just turned into this drawing. It was not meant to be political, but it just kind of evolved,” he said. “People had huge reactions to Trump and they loved the movie, those two things together: America getting stranger by the week with Trump running and Trump as president.”

O’Connell, 56, initially tried to get the work displayed on a billboard in the United States, but said he was rejected in several cities — despite raising $3,000 online to fund the project. “Major billboard companies, I think they were actually worried about getting people protesting. There was an actual real possibility that Trump would tweet about them or bash the company,” he said.

A Mexico City gallery then stepped in to get the work displayed in Mexico, the target of much vitriol from Trump. Trump kicked off his campaign in June 2015 with a tirade against Mexican immigrants, whom he referred to as drug dealers, criminals and rapists.

Anti-Mexican rhetoric was central to his campaign, with Trump vowing to deport Mexican immigrants en masse, make Mexico pay for a wall on the border and tear up the US trade agreement with Mexico and Canada. “Trump’s first (campaign) speech was calling everybody from Mexico rapists and thieves and how he was going to build this majestic wall to keep them out,” O’Connell said.

“Mexico being the only place where I can get this billboard erected, it was a wonderful ironic twist ending to the story.” In Mexico City, the billboard has met with bemused approval.

“To me, artistic expression related to Trump is a really good thing, in the sense that it has an impact on society, because this is kind of how we all feel, right?” said Carla Baeza, an employee at a telecommunications company in the capital. “I think the artist wanted to capture the essence of how Trump treats Mexicans. He doesn’t respect us much,” said computer programmer Julio Acuna. 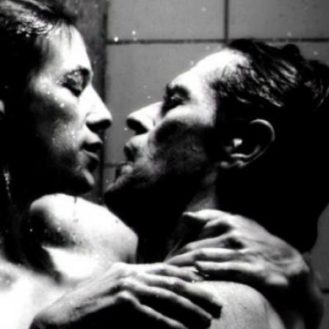