The tool that helps astronomers pinpoint new worlds lurking in the outer reaches of our solar system. (photo:NASA)

A brown dwarf over 100 light years away from the Sun has been discovered using a new citizen-science tool that helps astronomers pinpoint new worlds lurking in the outer reaches of our solar system.

Just six days after the launch of the Backyard Worlds: Planet 9 website in February, four different users alerted the science team to the curious object, whose presence has since been confirmed via an infrared telescope.

“I was so proud of our volunteers as I saw the data on this new cold world coming in,” said Jackie Faherty, a senior scientist at the American Museum of Natural Historyand one of Backyard World’s researchers.

“It was a feel-good moment for science,” said Faherty.

The Backyard Worlds project lets anyone with a computer and an internet connection flip through images taken by NASA’s Wide Field Infrared Survey Explorer (WISE) spacecraft.

If an object is close enough to Earth, it will appear to “jump” when multiple images taken of the same spot in the sky a few years apart are compared.

The goal for Backyard Worlds volunteers – of which there are more than 37,000 – is to flag the moving objects they see in these digital flipbooks for further investigation by the science team. So far, volunteers have classified more than 4 million flipbooks.

Days after the Backyard Worlds website debuted on February 15, Bob Fletcher, a science teacher in Australia, identified a very faint object moving across the WISE images.

It was soon also flagged by three other citizen scientists from Russia, Serbia and the US.

After some initial investigation by the research team, which originally called the object “Bob’s dwarf,” Faherty was awarded time on NASA’s Infrared Telescope Facility in Hawaii, where she confirmed that it was a previously unknown brown dwarf just a few hundred degrees warmer than Jupiter.

The authors of the research published in the Astrophysical Journal Letters said that sky surveys had missed this object because it is too faint.

Brown dwarfs, sometimes called “failed stars,” are spread throughout the Milky Way. They lack enough mass to sustain nuclear fusion but they are hot enough to glow in the infrared range of the light spectrum.

“Brown dwarfs are strikingly similar to Jupiter so we study their atmospheres in order to look at what weather on other worlds might look like,” said Jonathan Gagne, a Backyard Worlds team member from the Carnegie Institution for Science.

Although the Backyard Worlds research team hopes to find the infamous Planet 9 hiding in our own solar system, these brown dwarfs are also exciting discoveries.

“It is possible that there is a cold world closer than what we believe to be the closest star to the Sun. Given enough time, I think our volunteers are going help to complete the map of our solar neighborhood,” Faherty said. 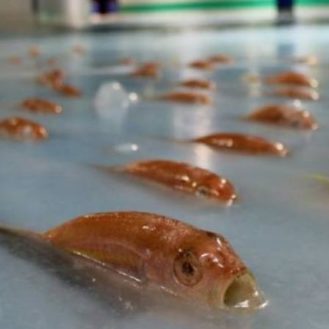