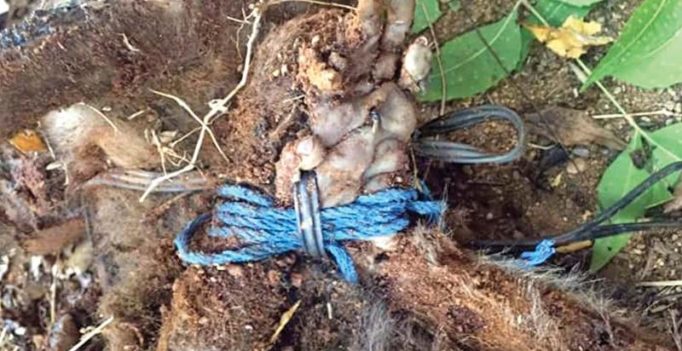 Monkey’s hands have been tied with wire (Photo: DC)

Chennai: Just a few months after two medicos flung a dog off the terrace in Chennai, another such crime has come to light raising a question about very integrity of medical students. A team of four medical students from the Christian Medical College, Vellore killed a 14-month-old female monkey in a brutal way — by tying the animal’s hands and neck with a telephone wire.

The magnitude of the abuse resulted in suspicions being aroused as to whether those involved were under the influence of alcohol. The incident came to light after some students tipped off animal activists in Chennai.

According to the FIR copy, the students are identified as Jasper Samuel Sahoo, Rohit Kumar Yenukotti, Arun Loui Sasi Kumar and Alex Chekalayil. According to wildlife conversationalist Nishanth Ravi, the animal succumbed to the torture after suffering multiple fractures all over the body. The animal was allegedly attacked with belts and rods on the hostel terrace. “The animal’s stomach was cut open and the intestine and organs were out. I cannot imagine the plight the monkey went through,” said Nishanth.

As the incident had happened in around 12.30 pm, the cries of the animal were heard by students who complained to a Mumbai based activist. “We rushed to Vellore on Monday, after learning about it. With the information received through an insider, we exhumed the carcass in the presence of tahsildar, village administrative officer and veterinary officer,” said another activist, Shravan Krishnan.

Deccan Chronicle contacted the college administration which could not disclose the identity of the youth. Promising to conduct a thorough investigation, the Principal of the college said, “Monkey menace is a serious issue here. There have been instances of monkey entering the rooms and being aggressive with students.”

Belonging to bonnet macaque, the monkey endemic to South Indian habitat is protected under schedule 2 of Wild Life Conservation act, 1972. According to the sub-inspector of Bagayam police station, a case has been registered in Bagayam police station under section 429 of the Indian Penal Code for mischief by killing or maiming animals which entails a punishment or a fine or both. The report of the autopsy conducted in CMC would be released on Thursday.