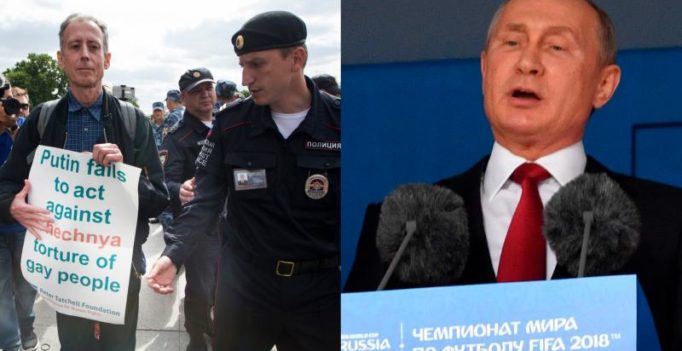 Moscow: Russian police briefly detained veteran British campaigner Peter Tatchell in Moscow on Thursday after he attempted to hold a one-man protest near the Kremlin in support of gay rights on the first day of the World Cup.

At the opening ceremony on Thursday, President Vladimir Putin spoke of showing the world a hospitable Russia and stressed sport’s ability to build bridges and overcome differences.

Tatchell’s protest, held three hours before the ceremony, involved the activist unfurling a small banner near the Kremlin’s walls calling attention to what his foundation described as Russia’s mistreatment of LGBT+ people.

“President Putin has failed to condemn and act against the homophobic witch-hunts in Chechnya, which have seen scores of LGBT+ people arrested and tortured, with some even being killed,” Tatchell said in a statement. He said he had been detained in Russia twice before.

Two men from Chechnya, a deeply conservative Muslim region of Russia, told Reuters last year they had been detained by police and subjected to torture because they were gay.

A Russian newspaper said several detainees had been killed. Chechen authorities said all such allegations were false.

Russian police quickly shut the protest down, with one officer telling Tatchell to stop what he was doing.

“During the World Cup it is forbidden to hold any action like this against Putin, against all these things,” the policeman said. Tatchell told the policeman he wanted to meet Putin to discuss gay rights in Russia.

The activist said he spent an hour and 40 minutes in police custody before being released.

“Senior officers were stern but the apprehending officer very helpful, friendly and polite,” the campaigner said, adding he was receiving support from the British embassy.

Britain’s Foreign Secretary Boris Johnson later wrote on Twitter: “Pleased to hear @PeterTatchell is well, and my thanks to our consular staff in Moscow at @ukinrussia for providing speedy support to him.”

Tatchell said he was required to appear in court on June 26, accused of breaking a federal law on the holding of public meetings and demonstrations, as well as a presidential decree that prohibits protests during the World Cup.

Tunde Aderibigbe, head of protocol for Nigeria’s football federation, said he believed the Russian government had done its best to deal with the issue of racism.

“We have been meeting a lot of (fans) and they are very cheerful. There hasn’t been any cause to think there is going to be something like that,” he said.

While Tatchell’s act hogged the headlines, there also was a Russian who displayed the rainbow flag during Putin’s speech at the opening game of the World Cup says he wanted to make LGBT fans more visible.

Alexander Agapov, who is president of the Russian LGBT Sports Federation, said, “I believe you should practice what you preach and if I’m telling LGBT football fans to be visible, then I should do it myself.”

Agapov added that while security staff had no problem with the flag, he did receive abuse from a spectator outside Moscow’s Luzhniki Stadium, who said “I don’t want that kind of world.”

Russian officials had said the rainbow flag – a symbol of the gay rights movement – would be allowed at World Cup venues. Russian law bans so-called “propaganda” of homosexuality to children, which is often used by authorities to ban any public discussion or symbols of gay identity in a public place where children could be present. 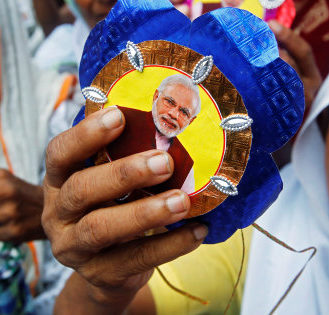