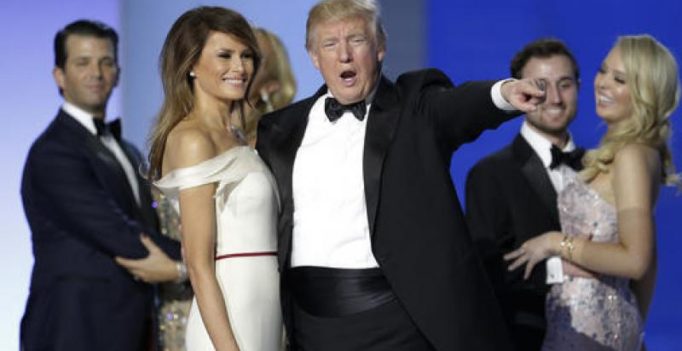 President Donald Trump acknowledges the crowd at the Freedom Ball in Washington at the Washington Convention Center during the 58th presidential inauguration. (Photo: AP)

Her column dress, finished with a sculpted ruffle that cascaded down the front of the gown and cinched at the waist with a red ribbon, won praise for being fresh, modern, elegant and yet understated.

She won rave reviews for her look and originality in choosing in Herve Pierre a New York-based designer who last year struck out on his own after working as creative director for famed label Carolina Herrera.

The 46-year-old former model glowed as she stepped onto the dance floor, her auburn hair hanging around her shoulders, with her husband, dressed in a black tie, to “My Way” the song made popular by Frank Sinatra and considered something of a personal anthem for Trump.

The couple swayed rather gingerly, the Republican president clutching his wife tightly by one hand and placing his other on her back as they nuzzled, and exchanged smiles and laughs.

The former reality TV star, who reportedly refused to practice the dance ahead of time, at times broke away from his wife to wave or flash a thumbs up to unidentified members of the crowd.

They were joined by Trump’s adult children from his two previous marriages, each dancing with their other halfs, and first daughter Ivanka stunning in a pink bead-encrusted princess Herrera gown.

Women’s Wear Daily, quoting Pierre, said Trump collaborated on the gown. He said it had been an honor to dress her “under my name” after dressing first ladies Hillary Clinton, Laura Bush and Michelle Obama while working for Oscar de la Renta and Carolina Herrera, it said.

The new first lady’s sartorial picks for the inauguration went some way to silencing critics who have complained in the past that she favored high-end European clothes rather than American creations.

Earlier in the day she donned a custom-made power blue suit from US fashion royalty Ralph Lauren for her husband’s swearing-in ceremony.

It was a look that channeled her 1960s predecessor Jackie Kennedy, of whom she has spoken admiringly, the wife of slain Democratic president John F. Kennedy and considered one of the most stylish first ladies.

Lauren, a 77-year-old master who personifies a rags-to-riches American dream is perhaps the country’s most iconic living designer, whose clothes define a uniquely American sense of elegance.

His decision to work with the new first lady comes after a string of other designers refused to dress her, citing opposition to her husband’s controversial policies on immigration and campaign insults.

An American first lady’s clothes have become hugely influential, believed to send implicit messages about the tone of their husbands’ administrations.

Both Melania Trump’s outfits on Friday are likely to go on display at the Smithsonian’s National Museum of American History along with first lady inaugural wear dating back to Mamie Eisenhower.

Obama was particularly praised for her savvy blend of accessible high street clothes with striking high-end pieces that championed a host of little known designers.

As the wife of a billionaire, it remains unclear whether Trump will follow Obama’s example and include cheaper outfits in her wardrobe.

She will also have to work hard to keep up with 35-year-old Ivanka, who unlike Melania is moving straight to Washington with her husband, Jared Kushner, an incoming White House advisor.

Tickets to the official balls went for $50 a head, which the Trump team said was designed to make them accessible to the ordinary voters who helped propel Trump into the White House, electrified by his populist, message that has nonetheless alarmed vast swaths of America.

The three official balls, the grand finale to inauguration day, served up a slice of old fashioned glamour with performances from the likes of the Rockettes, Michael Flatley’s Lord of the Dance and Sam Moore.

Aged 70 and the oldest man ever sworn in as US president, and the first to have never previously held elected or military office, Trump and his family took to the dance floor at all three.

The choice of “My Way,” a song made globally famous by Sinatra in 1969 is synonymous with Trump’s hometown New York and is own tear-up-the rule book approach to politics that ended in his widely unexpected election. 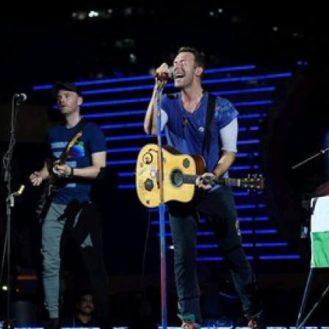