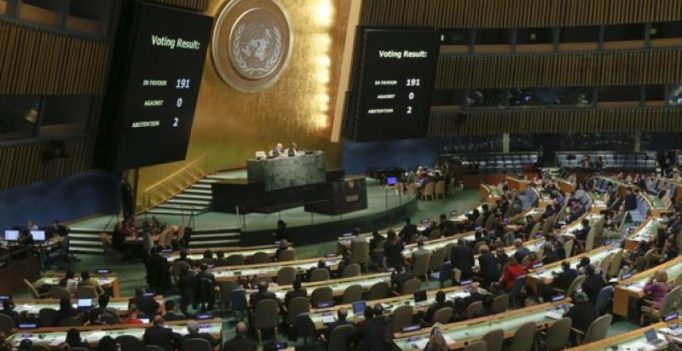 Large display monitors show the result of voting from member states during a meeting of the UN General Assembly, at U.N. headquarters. (Photo: AP)

United Nations: The United States on Wednesday abstained for the first time in 25 years from a vote at the United Nations calling for an end to the US embargo against Cuba.

The UN General Assembly adopted the annual resolution by an overwhelming vote of 191 votes in favor — with only the United States and Israel abstaining in the 193-nation forum.

Washington’s abstention was in line with calls from President Barack Obama for the opposition-controlled Congress to lift the decades-old embargo as part of a historic normalization of relations.

“The United States has always voted against this resolution. Today the United States will abstain,” US ambassador Samantha Power told the assembly, drawing loud applause.

“After 55-plus years of pursuing the path of isolation, we are choosing to take the path of engagement.”

The United States restored diplomatic ties with Cuba in July 2015 and a month later re-opened its embassy in Havana. Obama made a landmark visit to the communist-ruled island in March.

But restoring full trade and financial ties with Cuba would require legislative action by Congress, where the Republican majority has said human rights concerns must first be addressed.

Cuban Foreign Minister Bruno Rodriguez welcomed the US shift as positive, but said that Washington must take concrete steps that go beyond the “vote of one delegation in this forum.”

“The blockade continues to be a massive, flagrant and systematic violation of the human rights of all Cuban men and women and qualifies as an act of genocide,” Rodriguez said.

Economic damage suffered by Cuba from the US embargo between April 2015 and March 2016 — coinciding with the time of Obama’s first meeting with President Raul Castro to his historic Havana visit — is estimated at more than $4.68 billion, Rodriguez said.

Over the past six decades, the damage from “this genocidal policy” amounts to $753.688 billion, he added.

Embargo restrictions have prevented the sale of US medical equipment to treat Cubans suffering from Parkinson’s disease and blocked a deal by a Cuban pharmaceutical company that would have allowed it to produce drugs locally, said the foreign minister.

“There isn’t any Cuban family or sector in our country that has not suffered from its effects,” he said.

This year’s resolution takes note of steps taken by the Democratic Obama administration to ease the embargo, describing them as positive but “still limited in scope.”

The measure calls on all UN member states to refrain from applying the embargo and to “reaffirm the freedom of trade and navigation.”

Last year, the United States and Israel were the only two countries that voted against the non-binding resolution, but 191 voted in favor — the highest level of support yet for the measure at the United Nations.

Power recalled that the US policy aimed at isolating Cuba “was not working” and had instead isolated the United States.

“Abstaining on this resolution does not mean that the United States agrees with all of the policies and practices of the Cuban government. We do not,” said Power.

After praising Cuba for sending hundreds of doctors to West Africa to fight the Ebola virus outbreak, Power said the United States and Cuba must continue to find ways to engage, despite differences.

“Today, we have taken another small step to be able to do that. May there be many more — including, we hope, finally ending the US embargo,” she said.

The assembly has voted each year since 1992 to approve the resolution criticizing the embargo that was imposed in 1960, at the height of the Cold War.

The United States broke off diplomatic relations with Cuba in 1961 after Fidel Castro rose to power and aligned himself with the then-Soviet Union. 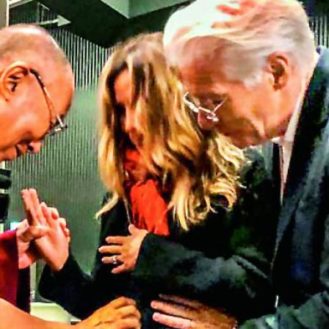