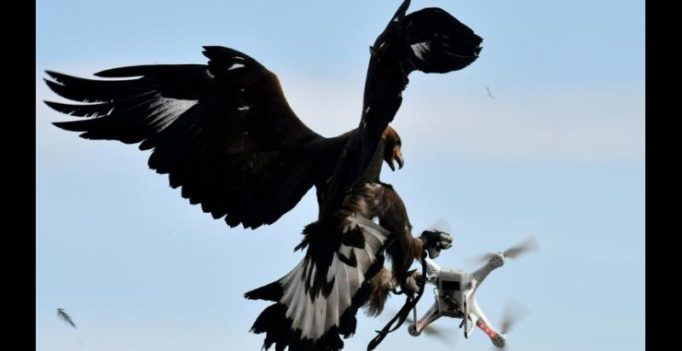 Mont-de-Marsan: At Mont-de-Marsan in southwestern France a quartet of fearsome golden eagles is being trained to take out unmanned aircraft in mid-flight.

The roar of a departing Rafale fighter jet gives way to the buzz of a drone lifting into the air on a runway at the air base, some 130 kilometres (80 miles) south of Bordeaux.

Suddenly, a loud squawk fills the air as a beady-eyed eagle bears down at breakneck speed from a control tower 200 metres away.

In about 20 seconds the raptor has the drone between its talons, then pins it to the ground and covers it with its broad brown wings.

The drone has been destroyed: Mission accomplished for D’Artagnan.

The valiant bird is one of four feathered fighters — along with Athos, Porthos and Aramis, all characters in French novelist Alexandre Dumas’s “The Three Musketeers” — being put through their paces since mid-2016.

Mont-de-Marsan is one of five air bases in France to boast falconry.

Usually, the birds of prey — generally falcons or northern goshawks — are kept to scare birds away from the runway to reduce the risk of accidents during takeoff or landing.

But with France on high alert after a string of jihadist assaults since January 2015, they are now sinking their beaks into national security.

“The results are encouraging. The eagles are making good progress,” said Commander Christophe, who heads the air safety squadron that is training the plumed predators.

Like all French military personnel, he offers only his first name and rank to journalists.

He says the birds are performing three to four months ahead of projections.

Police in The Netherlands were the first to come up with the idea of using raptors to intercept drones, inducting bald eagles into the service in late 2015.

The French army followed suit last year, but it opted for the golden eagle — a natural-born killer with a hooked beak, amber eyes and a wingspan of up to 2.2 metres (seven feet).

Like all birds of prey, the golden eagle has excellent eyesight, capable of spotting its target from two kilometres away.

At between three and five kilograms (11 pounds) it also happens to weigh about the same as most of the drones that could be used for nefarious purposes — or that simply go astray.

And an eagle is devastatingly fast, clocking 80 kilometres an hour as it swoops in for the kill.

Hatched in captivity, the four “musketeers” had their food served atop wrecked drones from the age of three weeks.

Thanks to this technique, the birds very quickly began to seize remotely piloted aircraft for food.

So when drones buzz above, their hunting instinct kicks in, with falconer Gerald Machoukow rewarding every successful interception with a hunk of meat.

The birds begin with flights in a straight line, graduating to diving from a height. Soon they will be casting off from peaks in the nearby Pyrenees Mountains.

The buzz around the project is palpable.

A first progress report is due in June, halfway through the 24-month test programme, but the initial feedback is positive.

“The cost is very low considering the job at hand,” said Commander Laurent, listing strategic sites such as airports, or events such as summits and football tournaments, among those where the eagles could be deployed.

To prevent the birds from harming themselves on the job, the military is designing mittens of leather and Kevlar, an anti-blast material, to protect their talons.

“I love these birds,” Machoukow said. “I don’t want to send them to their death.”

He cautions against setting “impossible” tasks for his charges, like launching them against larger drones with potentially deadly propellers.

Commander Laurent agrees that the birds are part of a palette of weapons available to the army in countering the threat from drones — not a fix-all solution.

But the air force is already smitten enough to have ordered a second brood of eaglets. 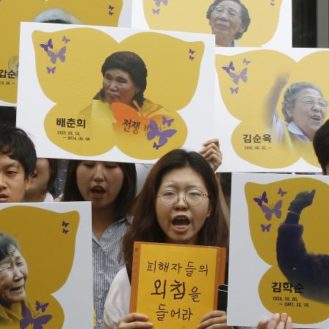 The Trump administration considers three of the nations targeted — Iran, Sudan and Syria — as state sponsors of terrorism. (Photo: File) Washington: The American…