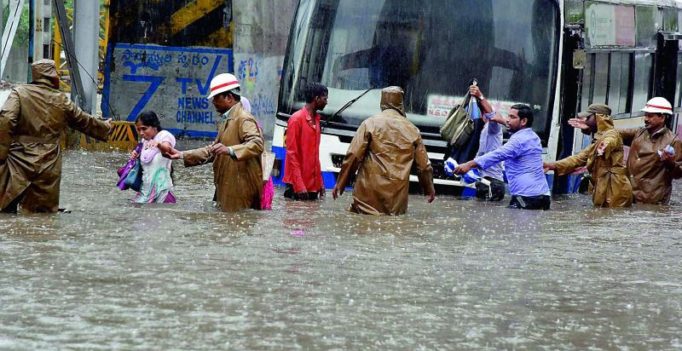 RTC commuters being rescued as a bus gets stuck under the Malakpet Railway Bridge. Heavy rainfall has been predicted for the next two days in the city.

Hyderabad: Hyderabadis woke up to lashing rains on Wednesday morning. Heavy to very heavy rain from 5 am claimed eight lives and inundated vast swathes of the city. Amberpet and Nallakunta recorded 12 cm of rainfall followed by Malkajgiri and Malkapur at 9 cm. The average rainfall received in the city on Wednesday was 7 cm.

The downpour, coupled with strong winds and lightning, continued for four hours, bringing down trees and hoardings. GHMC sent out a warning asking people to stay indoors unless there was an emergency, and asked people living in dilapidated buildings to vacate immediately. It also sounded an alert for people residing in the Hussainsagar catchment area. Most main roads were blocked, including those leading to the residence of the Governor and the Chief Minister. The Met department has warned of heavy rainfall for the city for the next two days too.

A majority of the city’s roads, underpasses and bridges were flooded by 9 am. Water entered low-lying areas of Mayuri Marg, LIC Colony, Karkhana, Lake View Apartments near Hussainsagar, Khairatabad Railway booking counters, Bholakpur and other areas. Chaderghat and Moosarambagh were closed for the general public. Trees came crashing down at Koti, KBR junction, Raj Bhavan Road and Saidabad. The wind velocity was 35 kilometre per hour.

In a rarity, unnecessary travel was discouraged
Heavy to very heavy rain from 5 am claimed eight lives and inundated vast swathes of the city on Wednesday. Between 7 and 8 am, Uppal received 6 cm and Rajendranagar 3 cm of rain. Following building collapses, minister K.T. Rama Rao urged people, especially those in dilapidated structures, to move to safety.

In the 12-hour period from 8.30 pm Tuesday , the average rainfall in Hyderabad was 2 cm. Post 7.30 am on Wednesday, the city was lashed with heavy showers for a few consecutive hours. At 9 am, the GHMC commissioner sent out a warning not to travel in the city for the next few hours.

Many two-wheelers were washed away, and cars and even heavy vehicles were found floating. Bikes were found floating at Sitara Hotel, LB Nagar Ring Road. There was heavy water stagnation at Gulmohar Park Colony as the recently built compound wall obstructed the rain water flow. At Kachiguda Chaderghat circle, a TSRTC bus was stuck for over 30 minutes due to flooded roads and around 20 passengers were stranded inside. The GHMC, meanwhile, has warned citizens not to open manholes without its permission. 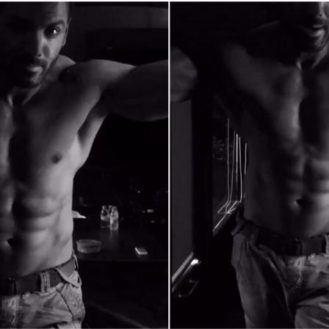