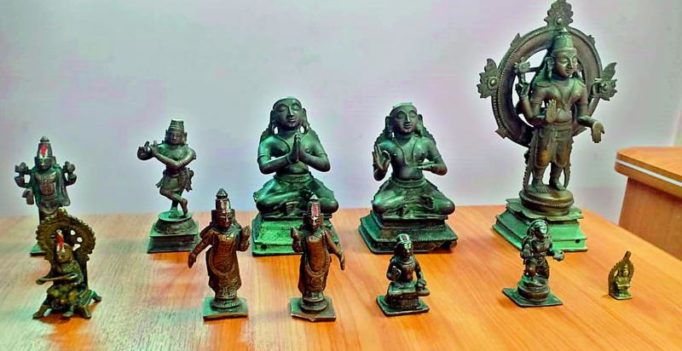 The Kakatiya era Panchaloha idols stolen from the Ramalayam temple was recovered by the police.

Hyderabad: Three persons were arrested by the Special Operations Team of the Rachakonda police for the alleged theft of 12 panchaloha idols worth Rs 3 crore. The idols dated back to the Kakatiya era.

The idols were stolen from a temple at Gundepudi in Mahbubabad district. The police apprehended the thieves on Friday morning near Kothaguda crossroads at Abdullapurmet while checking vehicles. The robbers had cut the idols into pieces and wanted to melt them to extract gold.

The gang had robbed the Ramalayam at Gundepudi on October 28. The robbery came to light when priest Samudrala Venkata Laxmi Narsimhacharyulu went to the temple and noticed the idols missing. The temple did not have CCTV cameras or a guard. The local police failed to crack the case.

On Friday morning, the Rachakonda SOT intercepted a car at Abdullapurmet in which K. Latchi Ram, 31, of Saidabad, K. Santosh, 21, of Meerpet, V. John, 31, of Chaitanyapuri, all drivers by profession, were heading towards the city. Police recovered three idols from their possession while checking the car. On questioning, Santosh confessed to concealing nine more idols at his home.

An official from the SOT said, “Latchi Ram once went to Gundepudi to pray and learned about the old panchaloha idols. He searched in Google to find out the value of the idols and saw that they would be valued between Rs 2 crore and Rs 3 crore. He approached Santosh, a previous offender, and John who has a car. They went to the village, conducted a recce and on the night of October 27 stole the idols.”

Rachakonda commissioner Mahesh Bhagwat said the trio was unsure as to how to sell the idols.

They cut small pieces from three idols and melted the pieces to extract gold. The age of the idols and their value will be estimated with the help of the archaeology department. Along with the idols, three silver crowns and a car have also been seized from the robbers, said the commissioner. 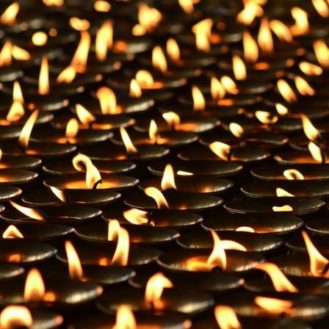