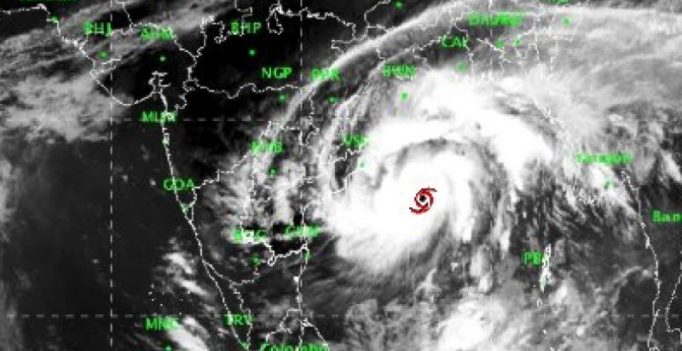 The cyclone is very likely to intensify further into a very severe cyclonic storm during the next 18 hours. (Photo: Twitter | @ndmaindia)

Bhubaneswar: Cyclone ‘Titli’ over the Bay of Bengal intensified into a severe cyclonic storm on Wednesday and is moving towards the Odisha-Andhra Pradesh coast, triggering rainfall in several parts of Odisha, the India Meteorological Department (IMD) said.

The cyclonic storm is likely to make a landfall between Gopalpur in Odisha and Kalingapatanam in Andhra Pradesh early on Thursday morning at a wind speed of 145 kmph, it said.

“Titli moved with a speed of about 10 kmph and intensified into a severe cyclonic storm and lay centred over west-central Bay of Bengal, about 370 km south-southeast of Gopalpur in Odisha,” the IMD said in a bulletin.

It is very likely to intensify further into a very severe cyclonic storm during the next 18 hours. The storm is likely to move north-northwestwards and cross Odisha and adjoining north Andhra Pradesh coast between Gopalpur and Kalingapatnam around Thursday morning, it said.

Thereafter, it is likely to re-curve northeastward, move towards Gangetic West Bengal across Odisha and weaken gradually, said Director of the Meteorological Centre in Bhubaneswar, H R Biswas told PTI.

The National Disaster Management Authority (NDMA) on Twitter said that in Andhra Pradesh, damage is expected over the districts of Visakhapatnam, Vizianagaram and Srikakulam.

The IMD said rainfall would be accompanied by gale wind speed reaching 60-70 kmph and gusting to 80 kmph along and off Odisha and north Andhra Pradesh coasts.

The sea condition is very high over the west-central Bay of Bengal. It is very likely to be phenomenal over the west-central and the adjoining north Bay of Bengal and along and off the south Odisha coast till Thursday, it said. Storm surge of height of about 1 metre above astronomical tide is very likely to inundate low lying areas of Ganjam, Khurda and Puri districts, it said.

The IMD advised total suspension of fishing operations and shifting of coastal hutment dwellers to safe places. Fishermen along the Odisha coast, and central and north Bay of Bengal were advised not to venture into sea till Friday.

In view of the adverse weather conditions, it has advised hoisting of local warning signal LW-4 at all ports of Odisha.

The Odisha government was also cautioned about the possible floods in view of the heavy rainfall across the state. The state government has already issued high alert in all districts, particularly those in the coastal region, to face the ensuing situation. The government geared up to face the situation setting a target of “zero casualty”.

The district collectors have been asked to remain alert and make necessary arrangements to shift people living in low-lying areas, the officials said.

The state government has ordered closure of schools, colleges and anganwadi centres in Gajapati, Ganjam, Puri and Jagtsinghpur districts from Wednesday.

Special Relief Commissioner (SRC) B P Sethi said steps have been taken for shifting people in vulnerable and low-lying areas to multi-purpose shelters.

Around 300 motor boats have been arranged to assist in rescue operation as there is a likelihood of flood situation due to possibility of heavy rains till October 11.

All the 879 cyclone and flood shelters have also been kept in a state of preparedness, he said.

The state has put the districts on high alert and asked the authorities to evacuate those living in low-lying areas and in ‘kutchha’ houses along the coast.

Chief Secretary A P Padhi said the cyclone was likely to make a landfall early on Thursday morning.

“Zero casualty is part of the state government’s disaster management policy. Stocking of food and shifting of people to cyclone shelters are also included in the policy,” Padhi said.

Sethi said teams of the National Disaster Response Force (NDRF) and the Orissa Disaster Rapid Action Force (ODRAF) along with Fire Service personnel have been sent to various districts.

Union Minister of Earth Sciences, Dr Harsh Vardhan on Tuesday took urgent review of the developing scenario of cyclonic storm ‘Titli’ over the Bay of Bengal and another cyclonic storm ‘Luban’ over the Arabian sea. A release from the Press Information Bureau added that the Union Minister had directed all senior officials to closely monitor the situation and ensure that all precautions are taken. 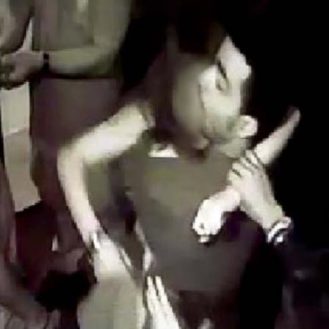 Sunny Leone Sunny Leone sure knows how to make the headlines. Her item song in upcoming film Raees is already a rage. Acknowledging the opportunity…