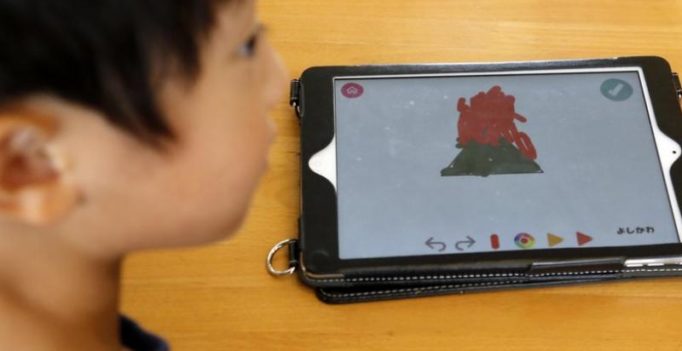 In a recent session, children got a triangle image on their iPads and were asked to draw on it with digital colours, store that image, and draw another one to create a two-screen story. (Photo: AP)

It’s drawing time at this suburban nursery school in Japan, but instead of crayons, tiny fingers are tapping on colours on iPad screens and taking selfies. Digital schooling has arrived in this nation long known for its zealous commitment to “three R’s” education.

Coby Preschool, in a small town northeast of Tokyo, is among nearly 400 kindergartens and nursery schools in Japan that are using smartphone software applications designed especially for preschoolers called KitS.

That’s only about 1 per cent of this nation’s kindergartens and nursery schools. But it’s a start. Coby is helping lead a national initiative in “digital play.”

Parents everywhere worry their children might fall behind, and Japan is no exception.

The government has recently made strengthening technology education national policy even as it struggles to meet its goal of supplying one digital device — computer or tablet — for every three children.

With KitS, developed by Tokyo-based startup SmartEducation, children colour birds and flowers that appear to come alive as three-dimensional computer graphics. Children also draw various creatures that, when captured in computer images, swim or float around in virtual landscapes.

In a recent session, children got a triangle image on their iPads and were asked to draw on it with digital colours, store that image, and draw another one to create a two-screen story.

The usually shy children burst into an uproar, brainstorming happily about what the triangle might represent: a sandwich, a rice ball, a dolphin, a roof, a mountain.

The children were then encouraged to come to the front of the class and explain what they had drawn as the images were shown on a large screen.

“There is no right or wrong answer,” said Akihito Minabe, the preschool principal leading the session.

The point is to nurture creativity, focus and leadership skills.

“They think on their own, they learn it’s OK to think freely, and it’s fun to come up with ideas,” said Minabe.

In the US, 98 per cent of children age 8 and under have a mobile device in their homes, while 43 per cent have their own tablet, according to The Genius of Play, a US program that researches education and play.

That’s similar to Japan, where each adult has an average of more than one smartphone and about half of preschoolers have to access to a mobile device, according to Japanese government data.

In the many US, Asian and European preschools and elementary schools, teachers use technology to present stories, music and other information. Educators are also studying children’s social development through how they learn to share digital devices.

Much of what’s driving the adoption of tablets in US preschools is a belief, founded or not, that an early start will make kids smarter at technology, said Patricia Cantor, a professor of early childhood education at Plymouth State University in New Hampshire.

However, early research into how tablets and apps affect learning for kids ages 2 to 5 is inconclusive.

Some studies show positive outcomes among young children using mobile devices to improve their literacy, science or math skills, but there’s little research comparing tablet-assisted learning to more conventional teaching approaches, according to a review of 19 studies by Christothea Herodotou, a lecturer at The Open University in the United Kingdom.

Herodotou said it’s unclear which features might help or hinder learning. Devices and apps can also be misused — for instance, to keep children occupied so teachers can do other things.

“Even if it’s designed to encourage learning or exploration or curiosity, it may not be used in that way,” said Cantor. “There’s so much junk out there.”

Still, the target age for “digital play” is getting ever younger.

Experts have known for years that playing is how children learn, says Ken Seiter, Executive Vice President at The Toy Association, a nonprofit, which represents businesses that design, produce, license and deliver youth-entertainment products.

Toys can teach toddlers simple programming or use augmented reality to bring story characters digitally alive, said Seiter, whose organization spearheads The Genius of Play, a US-based program that researches education and play.

Japan’s classrooms tend to be more structured than in the West, with students often acting in unison as they line up, bow and chant together. Children tend to be passive, and the emphasis is on the group rather than individuals. Youngsters, even some preschoolers, attend extracurricular cram schools.

KitS’ designers have sought to make activities fun. One aim appears to be nurturing outspokenness.

Yuhei Yamauchi, a professor of information studies at the University of Tokyo and KitS adviser, sees practical benefits.

By the time today’s 5-year-olds start work, most jobs will require computer skills. Given Japan’s shrinking population, people may work into their 80s, shifting jobs several times. Digital skills are more critical than ever, he said.

Digital tools deliver the equivalents of libraries and museums at a child’s fingertips, said Ron Shumsky, a child psychologist who works in Japan. That can be addictive, he cautions, and students must be taught safe and responsible “Digital citizenship,” he said.

It’s so compelling it pulls you in,” he said. “It keeps you wanting more.”

Experts warn that staring for too long at screens can damage eyesight and deter creative thinking. It’s a complex problem, since children may see their parents immersed in devices themselves.

KitS limit each session on the iPad to 15 minutes. Classes are held just 30 times a year.

At the preschool in Yoshikawa, a sleepy Tokyo bed town ringed by lush rice paddies, the children have mastered time-lapse photography using their iPads.

Japanese preschools like Coby are subsidized by local governments. Fees, including meals, are on a sliding scale based on income with the poorest families paying nothing.

Students use the iPad message function to send their parents photos of themselves in action and share trailers of their upcoming performances.

The kids are keen to talk about it, and parents say the endeavour encourages communication beyond the usual daily stream of commands: Eat dinner, take a bath, go to bed.

“I realized I tend not to wait for what the children have to say,” said hospital worker Masami Uno, whose son, 5-year-old Ayumu and 2-year-old daughter attends Coby. “It made me stop and think about that.”

She noted with a little pride that her father uses an iPad for work. But, referring to her iPad creation, she said, “He usually doesn’t draw shaved ice.” 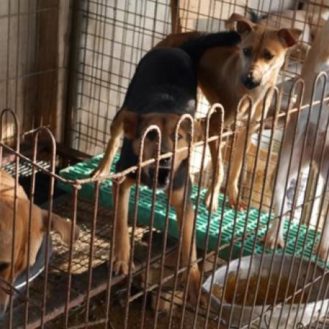