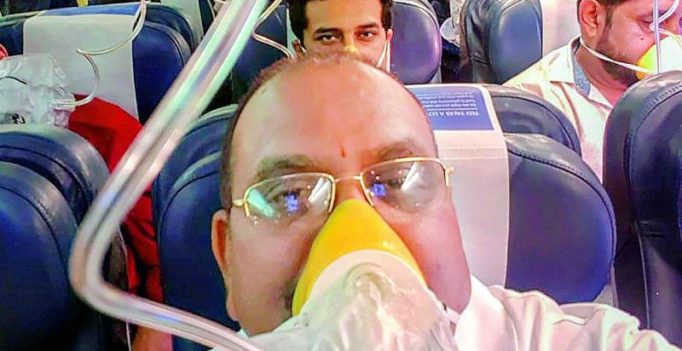 Passengers on board the Mumbai-Jaipur Jet Airways flight wear oxygen masks during an emergency after cabin pressure drop, in Mumbai, Thursday. (Photo: PTI)

Mumbai: Jet Airways passengers, who suffered nose and ear bleeding Thursday after the crew failed to turn on a switch that controls cabin air pressure, alleged that the flight crewmembers were like “trainees” who did not know how to handle the situation. Ankur Kala (38), who works for a jewellery firm and was going to Jaipur after coming to Mumbai from Bangkok, suffered nasal bleeding in the incident. He said, “As soon as we took off, the air conditioners were not working. It was suffocating inside. I came to know (later) from the media they had forgotten to switch on the cabin pressure machine.”

Recounting the ordeal, Mr Kala said about 15 to 20 minutes after the takeoff, the oxygen masks got deployed from the overhead compartments but there was no instructions on whether to use it or not.  “There was no announcement from the pilots or crew whether we were going ahead or landing. The crew members panicked more than the passengers,” he claimed. Darshak Hathi, international faculty of Art of living and Mumbai-based professional Prashant Sharma also had harrowing experience.

Sharing the ordeal Mr. Hathi said, “As soon as the flight took off, we started felling restless. Being a yoga teacher with my pranayam practise, I didn’t suffer as bad as others. The Air hostesses, instead of helping passengers, were busy in their own things. Many oxygen masks were not working.” Mr Sharma said, “I was sitting on an aisle seat when suddenly air pressure in the cabin dropped and oxygen masks came down. I saw a passenger sitting next to me bleeding from nose, which was terrifying. Several others complained of extreme pain in their ears.”

Mr Sharma further said that soon the crew announced that the plane would return to Mumbai airport. “It then circled over the airport for around half-an-hour before landing. There was no announcement from the crew,” he said. The passengers also complained there was no water was served to them. 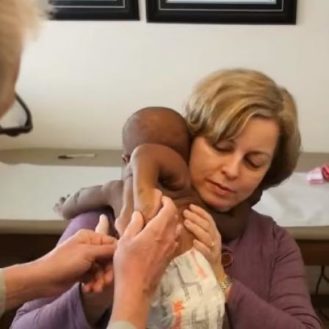