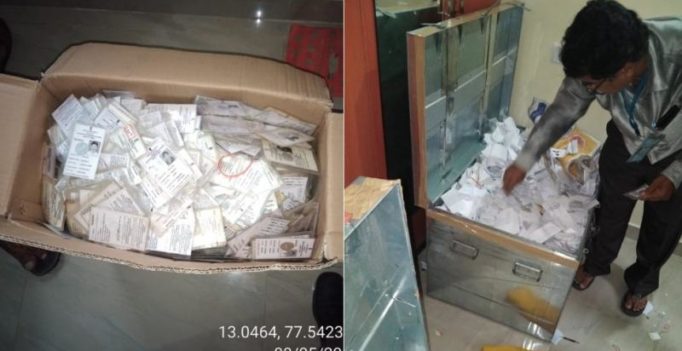 Bengaluru: With just three days left for the Karnataka Assembly elections, a major revelation has been reported from Bengaluru, where nearly 10,000 voter identity cards were recovered from an apartment late on Tuesday night. The Election Commission has ordered an inquiry into the discovery of the voter ID cards.

Alleging that the apartment from where the voter ID cards were recovered was linked to a Congress lawmaker, BJP has demanded that elections to the Raja Rajeshwari Nagar (RR Nagar) be cancelled.

The Congress hit back, accusing the BJP of enacting this “drama” of raiding an apartment owned by a local BJP leader and planting “fake evidence”.

The state election commission swept into action and convened a press conference at around midnight. Karnataka’s Chief Electoral Officer Sanjiv Kumar said the cards were found wrapped in smaller packets.

Sanjiv Kumar also said that form 6A (Application for Inclusion of Name in Electoral Roll by an Overseas Elector) with a counterfoil with certain numbers were also found. He also said that the colour in the counterfoil appeared unusual.

The commission went on to say that 5 laptops and a printer were also recovered from the apartment.

“In next 24 hours we will get to know more facts based on which a firm decision will be taken,” Sanjiv Kumar said.

The CEO’s official press release said that the apartment was owned by a person named Manjula Nanjamari and was rented to a person named Rakesh. “We do not know if he is related in anyway to Muniratna,” he added.

Raja Rajeshwari Nagar is one of the larger constituencies in Bengaluru and has about 4.71 lakh voters. In 2013, the seat had gone to the Congress’s Munirathna who secured 37 per cent vote share. Munirathna, who is seeking re-election, is pitted against the BJP’s Muniraju Gowda PM who put out a video of the search on Facebook.

According to BJP, its local leaders in the constituency had searched the place on their own.

Sadananada Gowda said they had discovered over 20,000 ID cards, five laptops, a printer and thousands of Election Commission forms used by new voters to enrol.

There are a total of 4,71,459 voters in Raja Rajeshwari Nagar constituency, and the elector to population ratio was 75.43 per cent, which is higher than the average for Bengaluru. 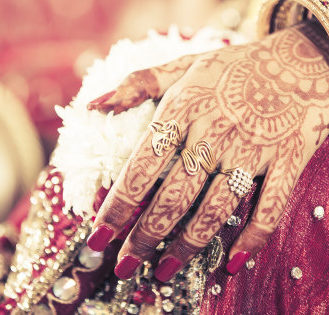