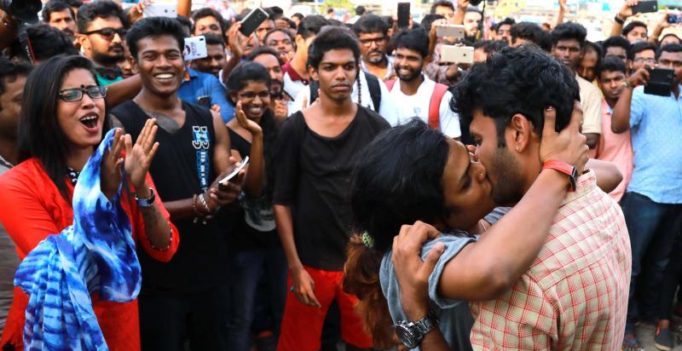 Kochi: Marine Drive in Kochi, the scene of moral policing by Shiva Sena activists on Wednesday, became the place to express freedom of love as several pairs locked lips to register their protest against hooliganism. The protests by different activist groups turned the place into venue of veritable counter-culture towards evening after the DYFI and Youth Congress staged their customary sit-in protest in the forenoon. The protests in the evening, marked by street plays, musical performances, were conducted by organisations such as Kiss of Love, People against Fascism and Kerala Sasthra Sahitya Parishad. A large crowd gathered to watch public kiss-in protest and a series of events including marches by various groups. “We stand by each other against hate and nothing will put out the fire in us,” said Lasar Shine, writer and Kiss of Love activist. Describing the protest as a warning against forces spreading hatred and violence, he said such activities will counter “hate and intolerance in the form of racism, sexism and discrimination towards sexual minorities”. The Thrissur-based Ooraali band sang their hits as the crowd cheered. A group of LGBT community also gathered at the venue to lend their support to the protest and raised slogans against the police discrimination towards them and called for the scrapping of Section 377 of IPC thats considers homosexuality a criminal offence.

A huge contingent of police led by city police commissioner M.P. Dinesh was present in the venue to prevent any untoward incident. The police made no efforts to prevent the public display of kissing and other protests. “There is no question of police intervening in this as long as protests are conducted peacefully,” the commissioner said. The venue however witnessed a few tense moments as a group of BJP activists marched along the walkway, raising slogans both against the Shiva Sena and Kiss of Love activists. The police, however, prevented them from entering the venue.

Youth Congress and KSU activists also led a march to the venue in protest against the alleged police apathy in controlling the moral policing. CPM Ernakulam district secretary P. Rajeev inaugurated the protest by DYFI and SFI activists in the morning. T.K. Aravindan (57), one of the Shiva Sena leaders who led the mob in chasing away the couples in Marine Drive, is an accused in a rape case registered at Elankunnappuzha police station three years ago. He also faces the case for attempting to sexually assault a deaf-and-dumb woman staffer of Elabugnnapuzha Government Higher Secondary School. 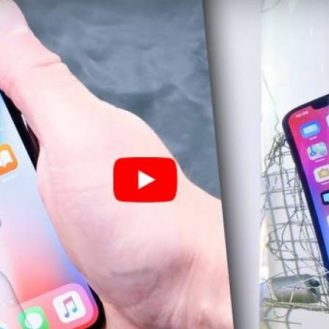 BlackBerry Spark stands out in a fast-emerging market as the only platform designed and built for ultra-security and industry-specific safety-certifications. BlackBerry has unveiled BlackBerry Spark,…

Flanked by police constables, Sourav Ganguly got into an argument with a fellow passenger about who the seat belonged to. (Photo: Screengrab/ Youtube) Kolkata: Former…