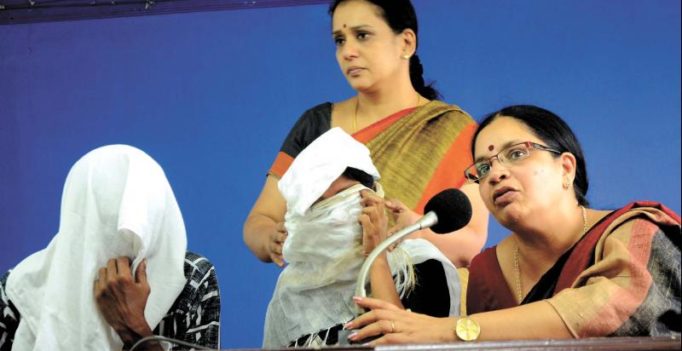 Dubbing artiste Bhagyalakshmi and actor Mala Parvathy along with the gangrape victim and her husband (wearing masks) at a press meet in Thiruvananthapuram on Thursday (Photo: Peethambaran Payyeri)

Thiruvananthapuram: “Which one gave you the greatest pleasure? That was the question asked by the police officer of   Peramangalam police station in Thrissur when  the victim of a gang-rape  went there to file a complaint in August.   The 32-year-old woman, who was allegedly gang-raped by  four friends of her husband,    recounted her horrifying experience before mediapersons at the Press Club here on Thursday. She was accompanied by her husband  and dubbing artiste Bhagyalakshmi, who revealed the tragedy in her FB post.

She identified the four accused as CPM Minalur bypass councillor P.N. Jayanthan, his brother  P.N. Janesh,  and two others, Bineesh and Shibu. The  case took a new turn   with Congress MLA Anil Akkara disclosing that the victim had sent a registered complaint to Chief Minister Pinarayi Vijayan two months ago.  She had approached him (Akkara)  with the complaint months ago but later she vanished, limiting the scope for further investigation at his level,  Mr Akkara said.

The woman, with her face hidden behind a veil and a  trembling voice, said, “more than the rape, the intimidation and humiliation suffered at the hands of the police was unbearable for me. I was called to the police station and made to sit there from morning till  night. This went on for three-four days. During this period the police asked vulgar questions and made lewd remarks,” she said.  “I was not the one who did anything wrong. But since I gave the complaint,  the cops used to harass us mentally,” she said sobbing.  When she could not continue, Bhagyalakshmi,  who was beside her, asked the victim’s husband Mahesh, whose face was also covered, to speak. “When we went to the police station, the CI asked how you yielded to the rape ? Did you show this and that to entice them. On hearing his words,  I was completely shattered,” he said.

“It is almost three months since we entered Thrissur because of the fear for our lives. They are powerful people and have a lot of influence over police. They coerced us to withdraw a complaint before the magistrate court. My husband was held hostage by them in the car in which we were brought to the magistrate court. They threatened us with dire consequences if we didn’t withdraw the complaint,” she said.

In her statement made under 164 CrPC and  given before the magistrate,  she stated that the compliant was given because of financial issues and that she wanted to withdraw it. While withdrawing it,  she was crying. When the magistrate asked whether she was gang-raped, she said yes but insisted on withdrawing the  complaint. The case came to light on Wednesday when  Bhagyalakshmi wrote a post on the Facebook that a police station  in Thrissur  had failed to act on the  complaint given by the gang-rape victim and  cops present there passed lewd remarks against her.

Mr Akkara alleged that three local CPM councillors were involved in “settling” the case and that there had been a deal.  The Congress men had taken out a march to the municipal office but nothing further could be done because the victim had gone missing soon after. He said he could not have proceeded further against the councillors, politically his rivals, because the victim herself had apparently developed cold feet.  He admitted that he should have pursued the case and now, in atonement, he would go to any extent to ensure justice to the victim  provided she is ready to fight the case, he said. 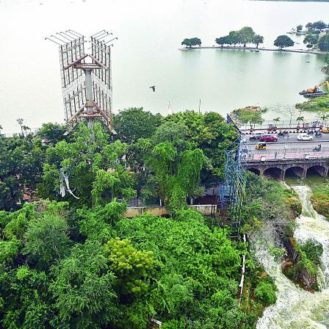