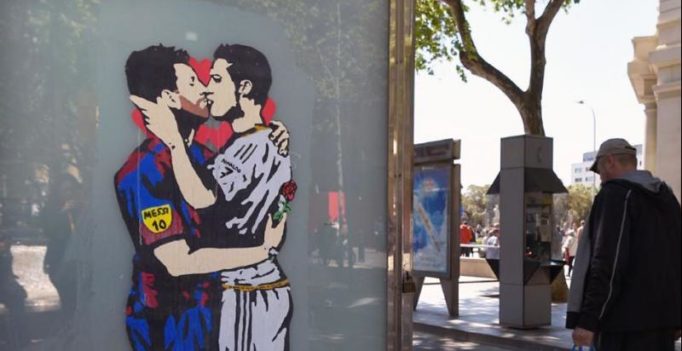 The graffiti on a bus stop in central Barcelona shows the Argentina and Barcelona star embracing and tenderly kissing his Portuguese Real Madrid rival. (Photo: AFP)

The graffiti on a bus stop in central Barcelona shows the Argentina and Barcelona star embracing and tenderly kissing his Portuguese Real Madrid rival, a football at their feet and a rose in Messi’s hand, drawing many camera-wielding tourists.

The artist Tvboy said he had been inspired by the fact that Sunday’s El Clasico game happens to fall on April 23 — which is when people in Barcelona and the wider region of Catalonia celebrate their very own Valentine’s Day.

“I’m looking for a message of hope and positivity. With all the clashes there have been in football between hooligans, I want to say: ‘be calmer’,” he said. “Messi and Cristiano are opponents, I know they would never kiss. But art must portray an ideal world, it must astonish, provoke.”Tvboy is an Italian from Milan who has lived for 13 years in Barcelona, whose streets have become his vast canvas.

His latest project dubbed “Love is blind” started during the United States of America election campaign, during which he drew Republican candidate and current president Donald Trump kissing his Democrat rival Hillary Clinton. 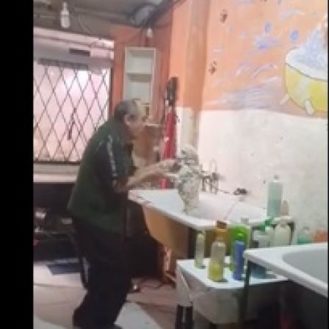