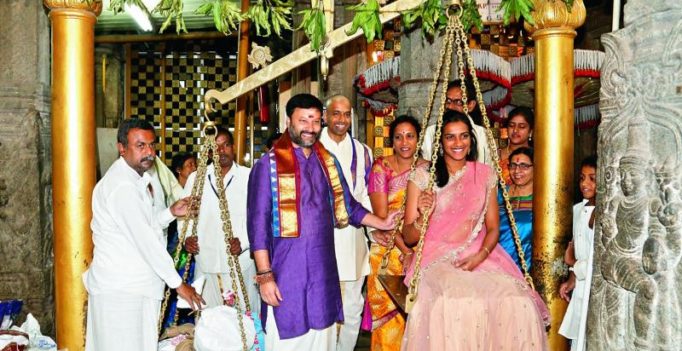 Silver medallist at the 2016 Rio Olympics shuttler P.V. Sindhu offers 68 kg of jaggery in Tulabharam in a temple at Tirumala on Sunday, to fulfil her vow. (Photo: DC)

Nellore: Lok Sabha Speaker Sumitra Mahajan said the Prime Minister’s ‘Skill India’ and ‘Make in India’ schemes were launched 15 years ago under the auspices of the Swarna Bharat Trust by M. Venkaiah Naidu, who is currently Union minister for urban development.

Addressing a large gathering on Sunday on the 15th anniversary of the trust at Venkatachalam, 16 km from Nellore, the Spe-aker said that Mr Venk-aiah had also fulfilled Mahatma Gandhi’s slogan of going to the villages and serving the rural poor through the trust, pointing to the gamut of services it had provided in education, skill development training, healthcare and agriculture.

Referring to the ‘Smart Cities’ Scheme that the Urban Development ministry had proposed, she said that such urban upgradation was necessary to some extent, but it would have no meaning if the villages were not developed.

She applauded the achie-vements of badminton player P.V. Sindhu — who was present at the function with coach Pullela Gopichand — who was now being seen as a gold medal winner at the next Olympics. Ms Mahajan was all praise for Pullela Gopichand for his abilities as a coach and his excellence in the game. “The word, ‘Pullela’, in Marathi means ‘fragrance disseminating from a fully blossomed flower”, and he too is imparting his knowledge to his students and wishing for their success,” she added.

Appealing to parents across the country to encourage their girl children to pursue sports, she stressed on the need to add ‘Beti Badhav’ to the PM’s slogans of ‘Beti Bachav’ and ‘Beti Padhav’.

Mr Venkaiah Naidu, who translated the speech of the Speaker into Telugu, claimed that he considered this a rare privilege. “I was party president in the past and minister in the Cabinet, and I never translate anybody’s speech, but in this case it is an opportunity,” Mr Venkaiah said.

“I used to tell members of Lok Sabha please conclude, here I will say please continue translating after I complete,” Ms Mahajan said amidst cheers from the gathering.

She said Mr Venkaiah Naidu is a philosopher, guide as well as elder brother to all of them. 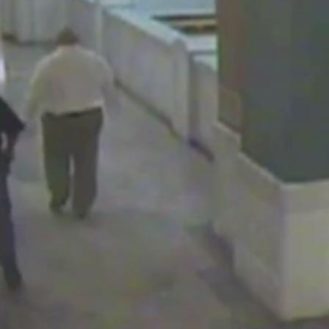