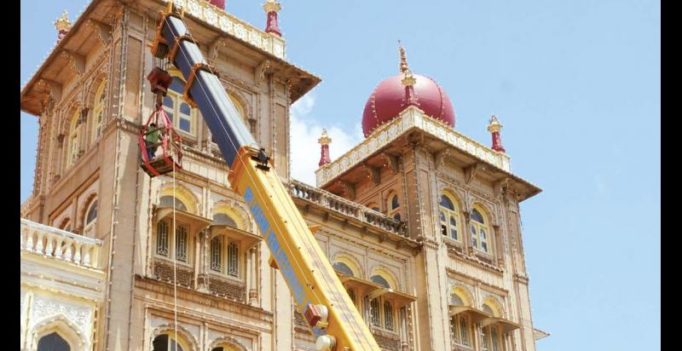 Preparations for Mysuru Dasara are in full swing at Mysuru Palace in Mysuru. (Photo:KPN)

Mysuru: The historic Mysuru Palace came alive to traditions of old as the 27th scion of the Mysuru royal family, Yaduveer Krishnadatta Chamaraja Wadiyar, ascended the  800- year -old  gem studded golden throne to hold a “private durbar” in its illuminated durbar hall as the Dasara celebrations kicked off on Wednesday.

While Mr Yaduveer wore a peach coloured brocade robe, a blue turban and a string of pearls and other antique jewellery, his wife, Trishikadevi looked resplendent in a green brocade banaras saree. Their little son, Aadyaveer, matched his parents’ grandeur in a pink kurta and cream pajama. Also present on the occasin were Mr Yaduveer’s adopted mother, Pramodadevi Wadiyar and his biological mother, Tripurasundaradevi.

Mr Yaduveer began his day with a ritual bath followed by a ritual to attach the lion mask to  the golden throne in the durbar hall. Once he had performed pooja to the family deity, Godd ess Chamundeswari, he had a  a kankana tied on his hand and entered the darbar hall at 11.28am to the  tunes of the nadaswara and palace band.

A team of priests performed a pooja to the golden throne before the young scion ascended it at 12.02pm.  He was then presented prasadam from the Chamundi hills, Nanjangud Srikanteswara temple, the Tirupathi temple, Malemahadeswara hills, the Srirangpatna Ranganatha temple, Parakala Math, Sringeri Math and the 13 temples in the grounds of the palace.  He was also presented “nazar,” a silver coin on a piece of cloth by his relatives in traditional attire.

As he held his private durbar, a team of royal assistants dressed in their traditional attire lined up on either side of the hall while an audience made up of among others, the Rajapurohit, M G Kumarswamy sat on either sides. Mr Yaduveer will continue to hold the durbar till October 18. 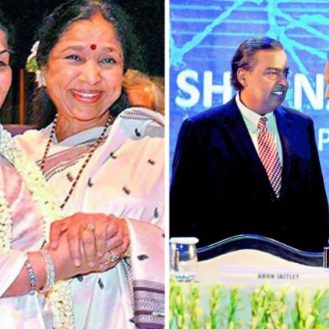