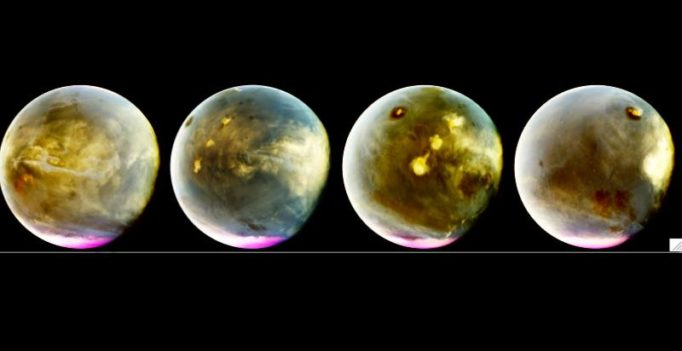 Scientists predicted NO nightglow at Mars, and prior missions detected its presence, but MAVEN has returned the first images of this phenomenon in the Martian atmosphere. (Photo: NASA)

In a first, NASA’s MAVENspacecraft has beamed back ultraviolet images of Mars that unveils dynamic, previously invisible activities in the atmosphere of the red planet such as change in ozone levels over the seasons and formation of clouds.

The images were taken by the Imaging UltraViolet Spectrograph (IUVS) on the Mars Atmosphere and Volatile Evolution mission (MAVEN) – a space probe designed to study the Martian atmosphere while orbiting Mars.

These were then used to make this movie of rapid cloud formation on Mars on July this year.

The movie uses four MAVEN images to show about seven hours of Mars rotation during this period, and interleaves simulated views that would be seen between the four images.

“MAVEN obtained hundreds of such images in recent months, giving some of the best high-resolution ultraviolet coverage of Mars ever obtained,” said Nick Schneider from the University of Colorado, Boulder in the US.

Nightside images show ultraviolet (UV) “nightglow” emission from nitric oxide (NO). Nightglow is a common planetary phenomenon in which the sky faintly glows in the complete absence of external light.

Mars’ nightside atmosphere emits light in the ultraviolet due to chemical reactions that start on Mars’ dayside.

Ultraviolet light from the Sun breaks down molecules of carbon dioxide and nitrogen, and the resulting atoms are carried around the planet by high-altitude wind patterns that encircle the planet.

On the nightside, these winds bring the atoms down to lower altitudes where nitrogen and oxygen atoms collide to form nitric oxide molecules. The recombination releases extra energy, which comes out as ultraviolet light.

Scientists predicted NO nightglow at Mars, and prior missions detected its presence, but MAVEN has returned the first images of this phenomenon in the Martian atmosphere.

Splotches and streaks appearing in the images occur where NO recombination is enhanced by winds.

Such concentrations are clear evidence of strong irregularities in Mars’ high altitude winds and circulation patterns. These winds control how Mars’ atmosphere responds to its very strong seasonal cycles.

Dayside images show the atmosphere and surface near Mars’ south pole in unprecedented ultraviolet detail. They were obtained as spring comes to the southern hemisphere.

Ozone is destroyed when water vapour is present, so ozone accumulates in the winter polar region where the water vapour has frozen out of the atmosphere.

The images show ozone lasting into spring, indicating that global winds are inhibiting the spread of water vapour from the rest of the planet into winter polar regions.

Clouds are a key to understanding a planet’s energy balance and water vapour inventory, so these observations will be valuable in understanding the daily and seasonal behaviour of the atmosphere, researchers said. 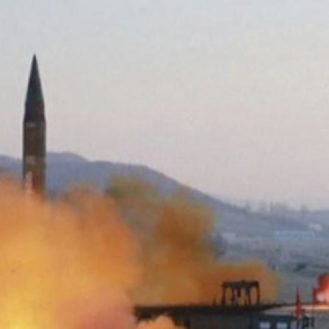