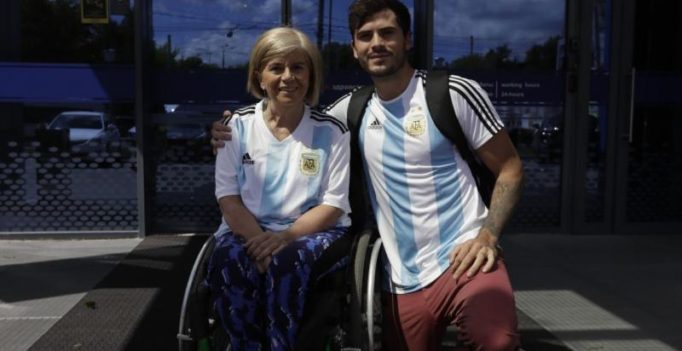 The Argentine fan of Lionel Messi, Nora Espector, who needs a wheelchair because she has multiple sclerosis, travelled to the World Cup in Russia with her youngest son. (Photo: AP)

Espector, who needs a wheelchair because she has multiple sclerosis, travelled to the World Cup in Russia with her youngest son.

The soccer passion runs in her family: Her grandfather worked for popular Argentine club Boca Juniors. Growing up, he would take her to watch games at the Bombonera, the club’s stadium which translates to Chocolate Box. The 55-year-old Espector is a self-described heart and soul Boca fan, but above all, she feels admiration and motherly love for the Argentina captain and five-time world player of the year.

“I have a son who is (Messi’s) age, and that makes me identify a lot with him,” said Espector, who works in the tourism industry in the Patagonian ski resort of Bariloche.

“I’m touched by his story, and always think about his mom. I always thought he was a special person. Such a down to earth kid, so humble in his way of being, a magical human being,” she said.

“And he’s miraculous as a soccer player. Sometimes, I think we’re not worthy of him” given the way he’s sometimes criticized in Argentina.

Messi quit the national team following three successive losses in finals: the 2014 World Cup, the 2015 Copa America and 2016 Copa America. He later returned on a wave of support after fans, players, and even Argentina’s president asked him to reconsider. But he has faced criticism again after the 1-1 draw in Argentina’s opening game to Iceland, where he missed a penalty shot.

“The tie is not so bad,” Espector said. “It’s not a failure. The Icelanders put in place an impassable wall.”

The two points lost to Iceland also don’t bother her as much, because she says that in her family, “there’s great affection” for Nordic people. Espector’s former husband and the father of her three sons, is Swedish, and she lived there for two years.

This is the third time that she is seeing Messi in person. She also attended a “clasico” match which Barcelona won 2-1 over Real Madrid in 2013, and a game in 2016 against Deportivo La Coruna, where she stayed in the same hotel as the players of the Catalan club. That time, she got to see the Argentina captain up close.

“I couldn’t believe it. I was so emotional that I broke down in tears,” she said.

Espector enrolled in Russian language lessons so she could know the basics before the tournament kicked off on June 14.

“She can read a lot (in Cyrillic), and that’s very helpful to us,” said her son, Emil Davisson, 26, who also works in the tourism industry in Bariloche. The mother and son rent cars to travel to the cities, and park close to the stadium with special permission.

“Going to the stadium is not that complicated, the hotels and transportation part is more complex,” said Davisson, who is the youngest of three brothers.

Davisson said that people in wheelchairs have a section reserved for them at the stadium at the front and sides of the stands. “If people stand up, they block you, so I lift my mom and hold her up,” he said. “Nothing stops us. I’ll solve anything that comes along.”

His mom chimed in: “I feel like I won an award,” she said proudly. “He’s with me and supports me with everything.”

The trip to Russia came after they applied for special tickets noting that Espector is in a wheelchair. They got five games at a total cost of $660. They then traveled with air miles to New York, and only paid for airfare from there to Moscow.

“It’s a sacrifice, but we’ve been saving for the trip since we found out that we had tickets,” Espector said. “All the money coming in was reserved to pay for this trip.”

Soccer is only part of the experience.

“Besides the games, we’re thrilled about what surrounds them – the colorful atmosphere. It’s something that transcends scores,” Espector said at the hotel where she is staying in the Russian city of Nizhny Novgorod before Thursday’s Argentina-Croatia game. Although she obviously wants Argentina to win, she says no one should question Messi regardless of the score.

“No one can talk badly about him in front of me. My friends know that,” she said. “You just don’t mess with my children!” 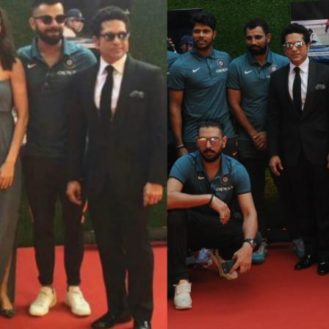