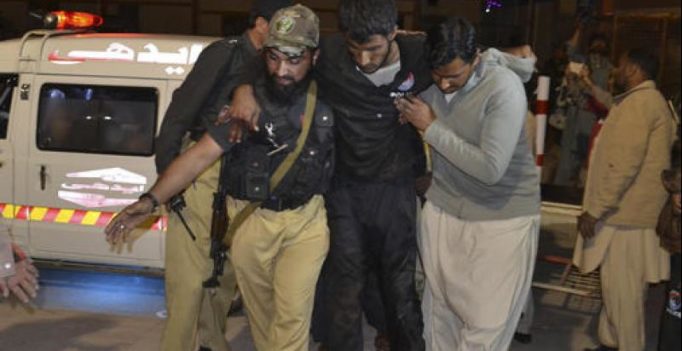 A Pakistani volunteer and a police officer rush an injured person to a hospital in Quetta, Pakistan. (Photo: AP)

Quetta: Pakistan’s Quetta city came to a standstill on Wednesday to mourn the 61 young cadets killed by Islamic State terrorists at a police training academy in one the deadliest assaults in the restive Balochistan province.

The streets wore a deserted look and people’s faces were sombre a day after the tragedy struck the provincial capital. Most of the shops were closed and the national flag was put at half-mast.

Funerals were underway as families bury some of the 61 people, most of them in their early 20s, killed in the attack.

Some of the dead bodies were sent to their native areas for burial. A collective funeral prayer was organised here yesterday amid tight security.

Nationalist and religious political parties in Quetta have called a strike to pressure law enforcement agencies into taking action against the elements involved in the attack.

Quetta traders have expressed support to the call and said all businesses and offices will remain shut in the city of nearly six lakh people.

Shops and activities remained halted in Chaman, Pishin, Loralai and other parts of Balochistan, which has been plagued by insurgency and sectarian killings for more than a decade.

Security forces have been deployed at sensitive areas of Quetta, a day after Islamic State militants attacked the facility when most of the cadets rested and were caught off-guard. Most of the terrified recruits had jumped out of windows and rooftops to escape the carnage as militants armed with Kalashnikovs went room-to-room to hunt them down.

Balochistan government has announced three days of mourning. It today said an investigation team led by a Senior Superintendent of Police has been formed to probe the carnage at the college, which was home to around 700 cadets.

“The team will visit the site of the carnage and speak to survivors of the tragedy to probe the incident,” Cheema was quoted as saying by Dawn.

The Monday night attack was not the first on security personnel in Pakistan. Militants have conducted many attacks against security forces and installations in Balochistan.

Despite that, a lack of security and poor infrastructure, that included a five-feet mud-wall perimetre, was blamed for the attack on the academy.

The facility has been attacked twice before. In 2006, six policemen were killed in five blasts and in 2008 gunmen fired rockets into the academy grounds.

Officials, however, have assured that investigations are going on to determine the identity of the attackers and their promoters. Islamic State and Taliban have claimed the attack but the government has accused Lashkar-e-Janghvi group. 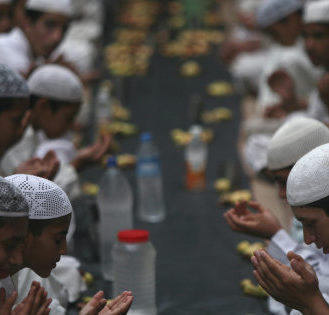 Muslims offer prayers before having their Iftar meal during Ramadan at a madrasa on the outskirts of Jammu August 8, 2012. Over 30 madrasas in…