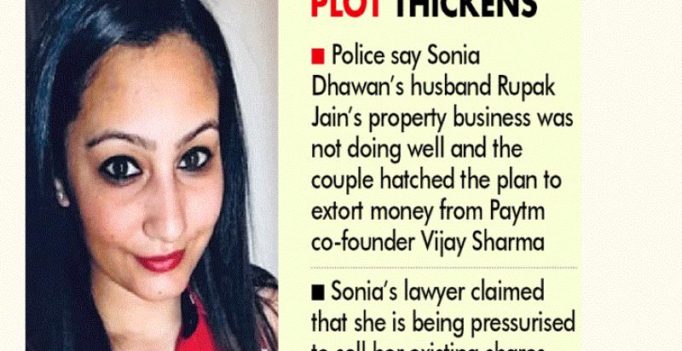 Sonia Dhawan, saying she plotted the extortion to buy a house worth Rs 4 crore in Delhi.

New Delhi: In the extortion case of Paytm co-founder Vijay Shekhar Sharma, even as the police assigned motive to company vice-president of communication, Sonia Dhawan, saying she plotted the extortion to buy a house worth Rs 4 crore in Delhi, along with her husband Rupak Jain, Dhawan’s family has claimed otherwise.

Calling the charges against Dhawan a plot to frame her, Dhawan’s lawyer Prashant Tripathi claimed that she is being pressurised to sell her existing shares.

According to Tripathi, Dhawan had been working with Paytm for almost 10 years, starting off as a secretary to Sharma in 2007, with a monthly salary of Rs 15,000. Her annual package had now increased to over Rs 70 lakh per annum and she had recently been promoted to the position of vice-president, corporate communications. She had been with the company during its rapid rise and as of now, was in a pretty stable position at her job to attempt something so outrageous.
Tripathi has also alleged that she was being accused of selling her stake in the company. Dhawan owned equity shares worth Rs 10 crore in the company. She also holds ESOP (employee stock option plans) worth 0.004 per cent and 0.02 per cent in parent company One97 Communication and Paytm E-commerce, respectively. Another news report quoted Dhawan’s sister Rupali saying the case against her was the result of a political rivalry. Rupali also confirmed that Dhawan was being pressurised to sell her shares in the company.  Considering her financial assets and earnings, the extortion amount of just Rs 4 crore seems paltry, said Rupali’s husband, adding that he has “hard evidence” to prove that someone from the Paytm boss’ family made the ransom calls from Kolkata.

Dhawan, her husband, and another Paytm employee, Devendra Kumar, have been sent to a 14- day judicial remand. The fourth accused, Rohit Chomal, is on the run. 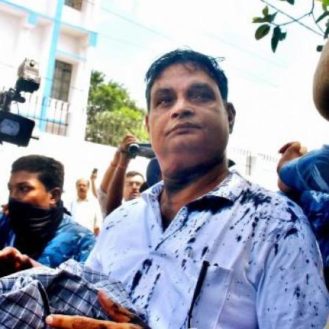