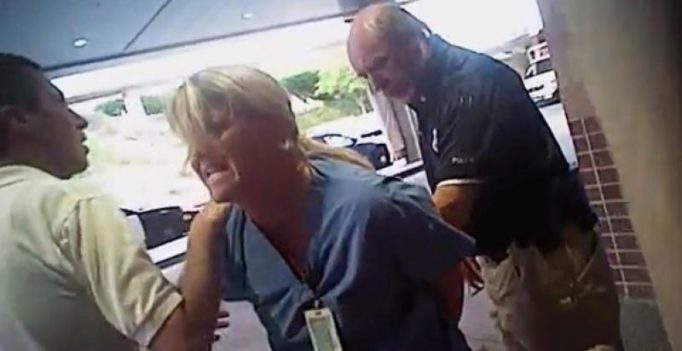 In this July 26, 2017, frame grab from video taken from a police body camera and provided by attorney Karra Porter, nurse Alex Wubbels is arrested by a Salt Lake City police officer at University Hospital in Salt Lake City. (Photo: AP)

Utah: A nurse at a Utah hospital said this week she was assaulted by a police officer after declining to give him a sample of an unconscious patient’s blood because he had neither a warrant nor the patient’s consent, local media reported.

Alex Wubbels showed videos from police officers’ body-worn cameras of her arrest at the University of Utah Hospital in Salt Lake City to a news conference on Thursday where she said her first duty was to her patients, the Deseret News reported.

The footage, filmed on July 26, shows Wubbels dressed in blue medical scrubs and consulting with colleagues for several minutes before presenting waiting police officers with a printout of the hospital’s policy on sharing blood samples to test for alcohol or drugs.

She tells the officers that under the policy, which she says was agreed to, by the Salt Lake City police department, she would need a warrant, the patient’s consent, or the patient would need to be under arrest.

“I’m just trying to do what I’m supposed to do, that’s all,” she says, noting they meet none of the criteria.

A hospital supervisor, speaking through Wubbels’ cellphone, tells the officers they are “making a huge mistake” in threatening a nurse.

One officer, identified in media reports as detective Jeff Payne, becomes angered and grabs at Wubbels.

Payne drags Wubbels outside as she screams.

“Somebody help me!” she says as Payne handcuffs her hands behind her. “You’re assaulting me! Stop! I’ve done nothing wrong.”

The patient was a truck driver who arrived comatose at the hospital after being badly burned in a crash with a vehicle being driven by someone fleeing police, the Deseret News reported.

Karra Porter, Wubbels’ lawyer, said at the news conference that the nurse followed the law and the police were wrong.

Brandon Shearer, a sergeant at the police department, told KUTV News that Payne had been suspended from collecting blood but was otherwise not being disciplined while an internal investigation was under way.

A police department spokesman, Richard Chipping, said there was no further comment.

The University of Utah issued a statement saying it supported Wubbels “and her decision to focus first and foremost on the care and well-being of her patient.” The hospital said it had also created a new policy with police that would preclude officers from arriving at patient care units in person for blood. 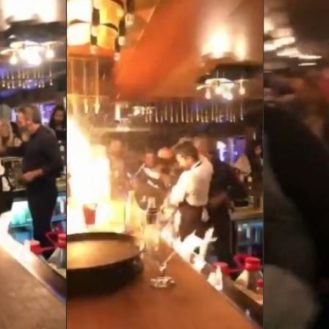