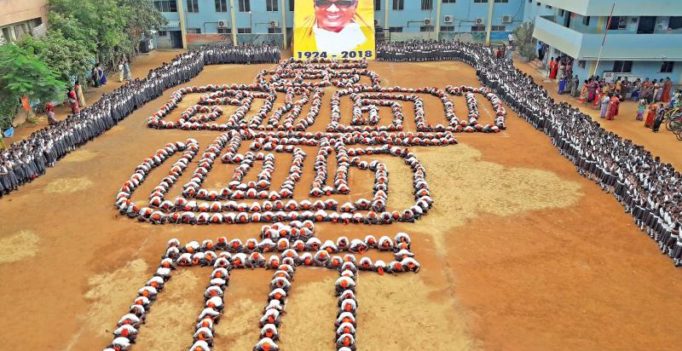 Around 4,000 students of Everwin Vidyasharam, Kolathur on Thursday, form the name of ‘Kalaignar’ to pay homage to the late former CM M.Karunanidhi. (Photo:DC)

Chennai: When the DMK working president, M K Stalin visited Anna Square at Marina sands on Wednesday, he was more concerned about the lack of an instant roof over his father M Karunanidhi’s burial place, close to that of his mentor Annadurai, with Monsoon rains playing truant. The politics to unfold in days to come was hardly on his radar.

For now, the party itself would take steps for providing a cover for their legendary leader’s final resting place. Yet, the range and status of leaders of various political parties from major Indian States where non-BJP parties continue to have a decisive say, who came not only to pay their last respects to the former Tamil Nadu Chief Minister Karunanidhi at the Rajaji Hall, but also took part in the funeral ceremony on the Marina sands on Tuesday evening, was more than custom, courtesy or protocol in an hour of immense grief for the DMK.

Sources here indicated that it all began with West Bengal Chief Minister and Trinamool leader Ms. Mamata Banerjee’s flying visit on Monday night to pay homage to the DMK patriarch, when his body was first kept at his Gopalapuram residence in the city, followed by the Prime Minister, Mr. Narendra Modi, the Congress President Rahul Gandhi and leader of the Congress party in the Rajya Sabha, Gulam Nabi Azad on Tuesday.

The trickling in of all top party leaders, particularly from the non-BJP side of the political spectrum, was a clear indication that the DMK was a valuable, potential ally from the south even post-Karunanidhi.

There was Karunanidhi’s long-time friend from J and K and National Conference leader, Farooq Abdullah who endorsed the spirit of the DMK government’s State Autonomy Resolution in 1974 when the late Dravidian leader was the CM here, besides all the Chief Ministers from the other southern States, Andhra Pradesh, Telangana, Kar-nataka, Kerala and union territory of Puducherry, Messrs.

N Chandrababu Naidu, Chandrasekhar Rao, H D Kumaraswamy, Pinarayi Vijayan and Narayanaswamy respectively. Not only did former Prime Minister, Deve Gowda whose JD(S) now leads a coalition in Karnataka with Congress, made it a point to again come down for the funeral, even the veteran Marxist leader, Prakash Karat, accompanied by CPI(M) general secretary Sitaram Yechury and G. Ramakrishnan, former State secretary, were among the dignitaries who paid homage, not to forget CPI’s national secretary D Raja and even former Kerala Chief Minister, Oomen Chandy. In fact, Karat had recently drawn flak for terming the DMK as “stagnating” at a party meeting in Thoothukudi.

But death, as even comrades agree, is a great leveler. There was then the Maratta strongman, Sharad Pawar, accompanied by former Civil Aviation Minister, Praful Patel, who said that Karunanidhi had shown the country “the way” in times of political instability in the past.

Ms. Sonia Gandhi had also in her message recalled how Karunanidhi was like a “father-figure” whose guidance and advise in both UPA-I and UPA-II regimes were beneficial factors.

While the Dravidar Kazhagam (DK) leader, K. Veeramani took the occasion to also convey that the parent organisation- as DMK had been an offshoot of the DK, will stand by Mr. M.K. Stalin’s leadership, as “indicated” by his father – Karunanidhi before the 2016 Assembly polls had said in an interview that should Nature do something to him, then Stalin could have a role-, the best compliment to Stalin came from the MDMK leader, Vaiko, who said he would “stand by Thalapathi”.

This is not to brush aside harsher political realities like the problems Mr. Stalin could face from his elder brother M K Azhagiri. Nor is to entirely ignore the fresh overtures the BJP is now making to the DMK – a source told this correspondent that a saffron party ideologue already had a brief talk with Ms Kanimozhi at the Kauvery hospital where her father had been ailing. But the big picture suggests that DMK is all set to play a key role in the ‘Federal Front’, the opposition is mulling at the national level in the run-up to the 2019 Lok Sabha polls. 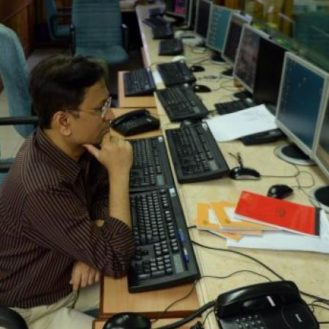