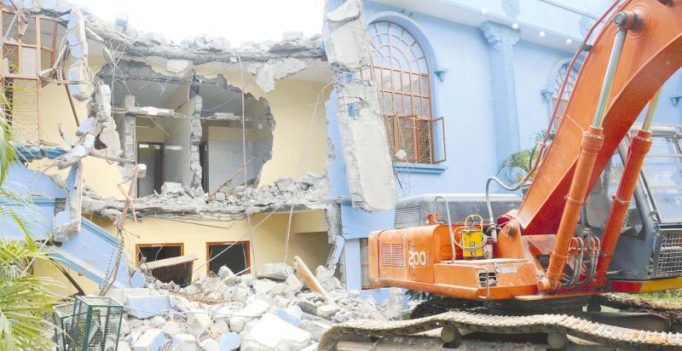 A wedding hall at Rajarajeshwari Nagar was demolished on Thursday. (Photo: Satish.B)

The truth behind the big encroachment mess may finally be out soon with nine BBMP officials who had allegedly cleared building plans in brazen violation of the norms, surrendering on Thursday. Will they spill the beans on the big fish who gave the nod for these clearances or will they keep passing the buck till the public outcry dies down?  Meanwhile, buildings are tumbling like ninepins but activists complain that many apartment complexes and malls are sitting square on rajakaluves and have been spared for some strange reason. The rich and powerful obviously still have their way!

As the JCBs continued to bulldoze buildings encroaching on storm water drains and lakes in the city, nine BBMP officials accused of conniving with builders to allow such constructions and causing avoidable flooding in rain, surrendered before the BMTF police on Thursday. The Karnataka High Court had on Wednesday ordered these  officials, against whom FIRs have been filed for approving constructions on the SWDs, to give themselves up.

The officials, Guruprasad, Shashidhar, B.T Mohan Krishna, Govindaraju, Chowdegowda, Liakath, Sunitha and Munikrishna, appeared before BMTF Superintendent of Police, D.Devaraju at around 10.30 am at the BMTF police station and were questioned till late evening. “A team of nine policemen has been appointed to investigate the case. While the officers were asked basic questions about their experience in the BBMP, their nature of work and so on today,  a more thorough inquiry will take place on Friday,” said an investigating officer. The BBMP officials, who had been absconding for a while,  had vacated their houses and did not reply to any of the  notices sent fearing arrest, but had now come forward as the government had assured them they would  not be arrested, he explained. All nine will be taken to the various spots for physical examination of the encroachments and then questioned more closely about their role in approving the building plans. “So far, they have denied any wrongdoing, claiming they were not aware of the violations when approving the  plans. But their statements will be verified  at the site of the encroachments on Friday,” said another investigating officer.

The officers’ interrogation is expected to go on for another three days. The BMTF police is meanwhile, still looking out for the remaining 11 BBMP officials, who are absconding. Those who have surrendered, have claimed they have no idea where the missing officers are.

Demolition continues despite protests
The BBMP continued its demolition drive in several parts of Bommanahalli, Mahadevapura and Rajarajeshwari Nagar zones on Thursday. Although it had stalled the demolitions in Allalasandra, Surabhi Layout, Jakkur, Chikka Bommasandra, Yelahanka Old Town and Puttenahalli in Yelahanka zone due to protests by the people, many houses were brought down in parts of Dodda Bommasandra.

The bulldozers also made their way into Akshay Nagar in Bommanahalli  with the court vacating a stay brought by owners of six vacant plots here and recovered the encroached government land, which will now be used for establishing a drain network. But in the process, a portion of an individual house was damaged. Bommanahalli zone joint commissioner, Muniraju, however, said  the occupants of the house had voluntarily demolished two pillars constructed on the drains. “There was no opposition or protests,” he maintained.

In Rajarajeshwari Nagar, the bulldozers brought down eight properties, including homes and commercial establishments near Padmavathi Kalyana Mantapa. In A.Narayanapura , Mahadevapura zone, 24 shops built by the BBMP itself were razed amidst protests by the shopkeepers who had rented them.

Shortage of surveyors
People of Kyalasanahalli near K.R Puram in  Mahadevapura zone got a breather on Thursday as BBMP engineers, who turned up to identify illegal buildings in the area  could not find any surveyors to do the job. While the worried residents cheered, BBMP engineers rushed to the revenue department to find some surveyors and in the process, the marking of properties to be demolished, which should have been completed by evening, did not start till 4 pm. Mahadevapura zone engineers said the BBMP had so far removed encroachments over 1.62 km and was in the process of  recovering another 1.58 km of government property. The house of actor Darshan at RR Nagar, constructed on a rajakaluve, has been marked for demolition (Photo: Satish.B)

No action taken against big fish yet?
Activists of several pro-Kannada organisations and other forums protested against the encroachment of government land by the Brigade Group in Yeswanthpur on Thursday. Accusing BBMP officials of being hand-in-glove with the builders of the Orion Mall and  taking no action despite the survey records showing that the drain network had been diverted to build it, the protesters demanded that it be razed immediately and the recovered land handed over to the poor to build houses. “The BBMP is indiscriminately demolishing houses of the middle class and the poor. But why is it not taking action against the big builder? Why this silence on demolishing the mall?” they asked angrily.

Located in the sprawling 39 -acre Brigade Gateway Township in Yeswanthpur, the Orion Mall allegedly encroaches upon 3.9 acres of government land identified for setting up of storm water drains. The protesters accused former BBMP officials of Mahalakshipuram of illegally converting the land in 2011 commercial use in return for a hefty sum. Although several reports had been filed by a former BBMP commissioner, deputy commissioner and other officials on the issue,  no action had been taken so far, they regretted.

Resurvey after protests by villagers
A resurvey began in Doddabommasandra village after hundreds of villagers protested the demolition  Wednesday evening charging that the survey records of the BBMP were inaccurate. Thursday morning saw surveyors do a spot inspection in response to the protests. Said Yelahanka zone assistant executive engineer, Shivakumar, “When the demolition drive in Doddabommasandra began on August 10 there were no protests. But later people stopped us from demolishing a building in the village near the BEL compound towards Muttharayaswamy Layout. Around 50 buildings, including houses and commercial establishments, were identified for the demolition.” The demolition drive would resume after the surveyors submitted their report to the BBMP, he explained. “There will be no delay once we receive the report,” he assured. 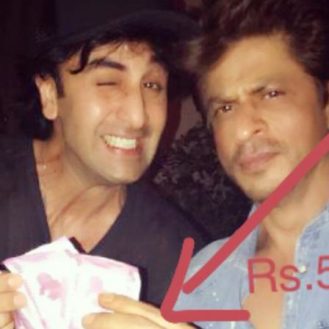