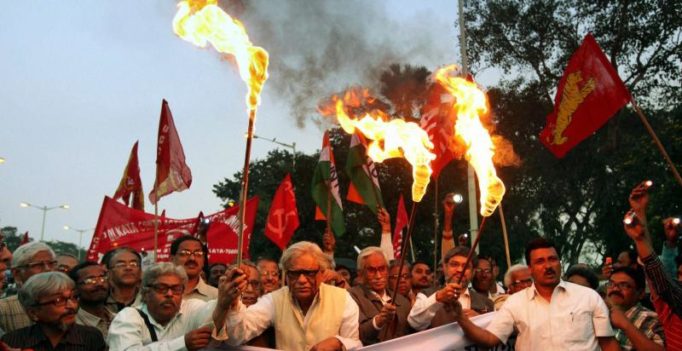 Hyderabad/Chennai /Thiruvananthapuram/Mumbai/Kolkata: The nation-wide strike called by central trade unions on Friday hit normal life in Telangana and Kerala, but it did not affect Tamil Nadu, West Bengal and Maharashtra where transport services and other businesses ran without any hindrances.

Banking operations came to standstill in Telangana as over 15,000 employees of various banks participated in the general strike called by trade unions to protest governments “anti-labour policies”.

All India Bank Employees Association (AIBEAP) Joint Secretary B S Rambabu said demonstrations will be held in all the district headquarters along with other trade unions.

“Though branches will be open, there is no business taking place in PSU banks. Clearing will also be impacted. However, there will not be any problem with regard to ATMs functioning,” Rambabu said.

Most of the buses run by Telangana State Road Transport Organisation are kept off the roads, a senior official said.

“We will not directly participate in the strike, but wear black badges and attend duties,” Satyanarayana said.

According to him, Revenue department officials are not participating in the strike as they are busy in reorganisation of districts.

Most of the industrial parks witnessed thin attendance today.

Ten central trade unions have called for a one-day nationwide strike today, protesting the “anti-worker” changes in labour laws and the Centres “indifference” to their demands for better wages.

In Left-ruled Kerala, public transport vehicles stayed off the roads, and shops and business establishments downed their shutters.

Autorickshaws, taxies, Kerala State Road Transport Corporation (KSRTC) and private buses are not plying on roads across the state with the workers of various unions taking part in the strike.

Major roads wore a deserted look in the state capital where hundreds of employees of ISRO units, including Vikram Sarabhai Space Centre (VSSC), could not reach their offices as the strike supporters laid a siege of an ISRO bus bay here.

Train passengers had a tough time as they had to walk to their homes after alighting at the railway station here.

All major unions, barring RSS-associated BMS (Bhartiya Mazdoor Sangh), have joined the strike, terming as “completely inadequate” the Central government’s assurances to look into their demands and the recent announcements for two-year bonus and hike in minimum wage.

This is the first major strike in Kerala after the CPI(M) led LDF government came to power in May this year. Chief Minister Pinarayi Vijayan has courted controversy after expressing support to the strike on Facebook with BJP hitting out against him.

Three convoys of buses, which were to carry employees from different localities, could not leave as strike supporters laid siege of the bus bay of ISRO units at Pattom.

About 6,000 odd employees of the VSSC in Thumba, ISRO Inertial Systems unit, a R&D unit of ISRO at Vattiyoorkavu, Liquid Propulsion systems centre (LPSC) and Indian Institute of Space Science Engineering college at Valliamala have been held up, sources said.

The union leaders led by former CPI(M) MLA, V Sivankutty staged a dharna in front of the bus bay this morning preventing employees from getting into the buses.

“Not a single bus has left the Pattom station since 7 am on Friday morning. We are not sure when the convoys will ply,” a VSSC official said.

In the past 15-20 years, we were never affected due to strikes as employees used to get transport arrangements, the official said.

Some vehicles of Technopark employees were also blocked. In the Apollo Tyres Perambra unit, BMS workers came for work for the 6 am shift and striking workers tried to prevent them.

However, police intervened and allowed them to enter the unit. Employees of the Fertilisers and Chemicals Travancore (FACT) were also prevented at Kochi, police said.

The suburban trains, autorickshaws, taxis and city buses in Maharashtra continued to operate normally, without affecting the daily schedule of lakhs of commuters in Mumbai and suburbs.

A CPM state unit leader said that there were instances of ‘rasta roko’ (block roads) at various places in rural Maharashtra.

He claimed that there was an ‘overwhelming’ response to the stir in the industrial belts of Maharashtra.

Several government employees also stayed away from work, he said.

All India Banks Employees Association general secretary Vishwas Utagi said entire financial sector will get paralysed on Friday with all banks, except SBI, being on strike.

The LIC, Nabard, GIC among others are also participating in the strike, he added.

Essential services such as banking, transport and telecom are likely to be hit on Friday as 10 central trade unions began nationwide strike, protesting against “anti-worker” changes in labour laws and the Centre’s “indifference” to their demands for better wages.

All major unions, excluding RSS-associated BMS (Bhartiya Mazdoor Sangh), have joined the strike call, terming the government’s assurances to look into their demands and the recent announcements for two-year bonus and hike in minimum wage as “completely inadequate”.

On its part, the government has asked all ministries to ensure that public utilities and essential services are not affected. Secretaries of all departments have been asked to take effective measures for smooth running of various services coming under their respective ministries.

Union Labour Minister Bandaru Dattatreya had on Thursday blamed the previous UPA government for the issues faced by the workers and said the present government “doesn’t want a confrontation with labour unions” and rather needs their cooperation and support.

He had conceded banking and insurance sectors are likely to be impacted more due to the strike on Friday, while adding that out of 12 demands of the trade unions, eight are related to the labour department and seven of them have been agreed to.

The ruling AIADMK’s labour wing is not participating in the strike called by ten central unions protesting “anti-worker” changes in labour laws and the Centre’s “indifference” to their demands for better wages.

The striking union members staged demonstrations at various places raising slogans in support of their demands.

A Madurai report said the strike did not affect normalcy in most parts of southern districts of the state.

However, inter-state buses to Kerala were stopped at the border towns of Nagercoil and Theni.

Central government government offices wore a deserted look with the employees joining the strike while a section of state government employees, especially in the revenue department, are also participating in the strike, the report said.

Shops in most places were open and autorickshaws were seen plying as usual.

Police have been deployed for providing security to PSUs and government offices to prevent any untoward incident.

Private buses were off the road in Tiruvarur district.

More than 50,000 police personnel have been deployed in southern districts, police said adding so far no untoward incident had been reported.

Government buses in West Bengal and other private vehicles were operating normally on the roads, officials said.

Train services at Sealdah and Howrah sections, and Metro Rail services were also as usual. However, the rush of passengers was less.

“So far, there have been no major incidents, except a few small incidents in some districts,” said a senior police official.

In Kolkata, seven persons were arrested for trying to enforce the strike forcefully.

CITU-led Left trade unions claimed that the strike is going on peacefully and accused Trinamool Congress (TMC) of trying to incite violence at some places.

“The people of the state have willingly participated in the strike. In most of the places it is peaceful but in certain areas TMC is using its muscle power to break the strike,” CITU State President Shyamal Chakraborty said.

West Bengal Chief Minister Mamata Banerjee on Friday said while leaving for Italy, “The strike will be a complete failure in the state. I will be monitoring the entire work personally. Even though I will be out of the state but I will monitor the situation. My appeal to everybody is to reject the strike for the development of the state.”

The ruling TMC, which is opposing the strike, is celebrating Singur Divas throughout the state in order to counter the strike on Friday.

“The people of Bengal have already rejected this obsolete strike culture. People are busy celebrating Singur Divas,” TMC Secretary General Partha Chatterjee said. Banerjee on Thursday said there will be no ‘bandh’ in the state and warned of strong action against those who disrupt public life.

Banerjee said her government is also planning to introduce a new law under which those who ransack and damage property during ‘bandh’ will have to pay compensation.

The Left Trade unions, however, challenged the government to foil the strike and accused TMC of planning to incite violence in the state in the garb of observing ‘Singur Divas’.

To protest against the government’s “indifference” to their demands for better wages and facilities and the “anti-worker” changes in labour laws, all major central trade unions, excluding RSS-associated Bhartiya Mazdoor Sangh, have joined the strike call. 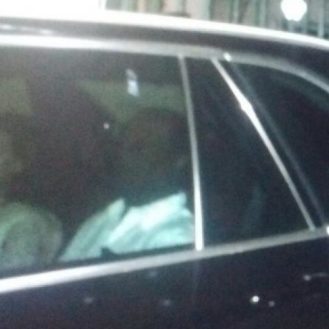