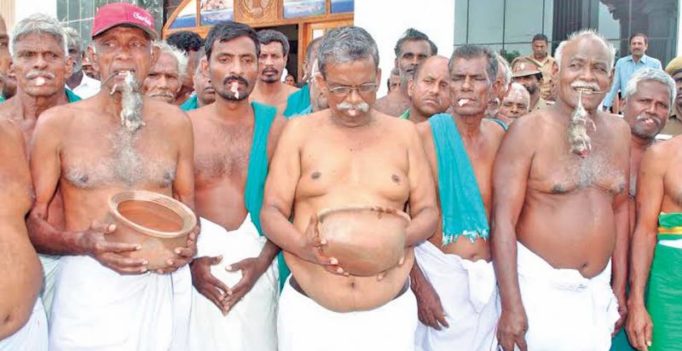 Tiruchy: Tension prevailed for a while when a section of farmers of the ‘Desiya Then India Nathigal Inaippu Vivasayeegal Sangam’ led by their state president P. Ayyakkanu, with begging bowls in hand, rolled over on the road and also attempted to eat rat meat before the collectorate here on Friday, to highlight the pitiable plight of farmers.

The agitators who came to the collectorate to take part in the monthly agriculturalists’ grievances’ day meeting resorted to this agitation, before the commencement of the meeting, demanding among other things that Tamil Nadu should be declared as drought-hit, and write off all farm loans among others.
After this brief high drama, they attended the meeting where they pressed their demands.

Similarly, members of the farmer’s wing of the Tamil Manila Congress led by their State President Puliyur Nagarajan, CPI-affiliated Tamil Nadu Vivasayeegal Sangam led by their district secretary Sivasuriyan and others also staged a demonstration in front of the Collector’s office entrance. Tiruchy district collector, K S Palanisamy assured to forward their demands to the State government.
IN TIRUVARUR:

Volunteers of DMK’s Tiruvarur district unit led by its secretary Poondi Kalaivanan and DMK farmers’ wing state secretary A K S Vijayan staged a demonstration in front of the office of the revenue divisional officer (RDO) at Tiruvarur on Friday, urging the Tamil Nadu Government to declare the entire State as drought affected and pay Rs. 10 lakh compensation to kin of dead farmers among others. 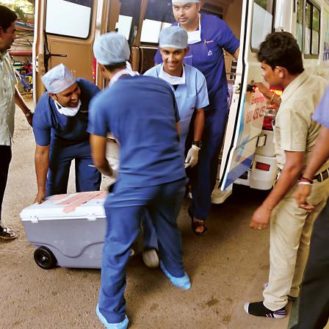 Representational Image. (Photo: File) Beijing: Sixteen people including two surgeons have been jailed for between two and five years in China for trafficking in human…