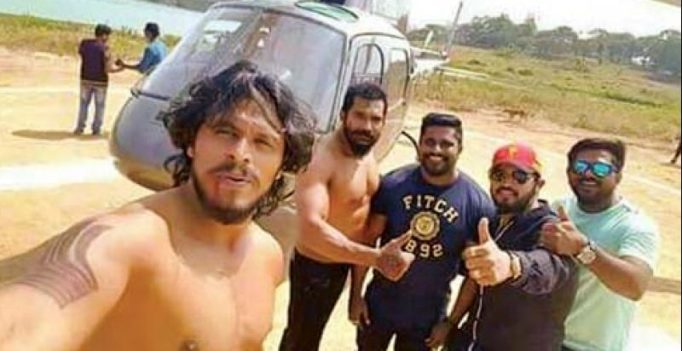 Stuntmen Raghav Uday and Anil take a selfie just before jumping into the helicopter for the shoot that ended in the tragedy, at Thippagondanahalli Reservoir on Monday (Photo: KPN)

Bengaluru: What should have been another typical day at outdoor shooting turned fatal for two budding actors when the team of ‘Maasthi Gudi’ decided to shoot aerial shots when a BWSSB engineer left the spot for lunch.

Assistant Executive Engineer Anusuya attached to the Thippagondanahalli subdivision was present at the spot where the Kannada film was being shot since morning. Around 2.30 pm, she left the reservoir to have lunch, sources said.

“Every officer must give spot instructions when permissions are sought to shoot at reservoirs or near any other water bodies. The AEE was present at Thippagondanahalli since morning and had briefed the team where they were allowed to shoot. She had even explained to them that they should not enter prohibited areas. But soon after she left the spot for lunch, the crew ventured out to shoot in the prohibited area. Even before she returned, the damage was done,” a source maintained.

It’s polluted water at dam
For long, Thippagondanahalli Reservoir was the only drinking source for North and West Bengaluru. In 2012, when water contamination became very high due to direct flow of raw sewage from Hessarghatta and nearby villages, the BWSSB stopped pumping water from the reservoir.

“Apart from direct flow of sewage, even industrial effluents from Peenya and surrounding areas enter the water body, making it unfit for consumption. With very high levels of total dissolved solids and total organic carbon, it was no longer fit for human consumption,” a BWSSB official said. He stressed that compared to normal water, it is difficult to swim in polluted water because of the presence of dissolved solids.

BWSSB rule violated
On the permission given by the BWSSB officials, it clearly states that the film team did not have permission for an aerial shoot, and not in the restricted areas.
The police have registered a case, listing the prima facie violations, with senor officials directing that a criminal complaint be registered against the directors, the producers and others involved in the film.

“According to the media visuals I saw, it appears that the film crew violated the permission we gave for the shoot. They were not permitted to shoot inside the reservoir which is a protected area. They were permitted only to use the backwater and forest areas”, Mr Jagadish said.

Stating that he has sought a report from the local BWSSB engineers, Mr Jagadish said “Only after receiving the report will I know the violations done by the film crew. Suitable action will be also be taken against the BWSSB engineers if they are found guilty and for letting them shoot in prohibited areas”.

Those present at the reservoir said that the personnel used special lights to continue the rescue operations in the midnight. The police maintained that even if the bodies were entangled in silt, they would be able to fish out the bodies.

Police to register criminal case
The Tavarekere police till late night had not registered a case in connection with the incident. Sources said that no complaint was received and they could not register an FIR as all senior officers were busy with the operation to retrieve the bodies of Uday and Anil.

However, it is learnt that the police will register a criminal case against the crew, mainly the stunt choreographer, for his negligence and not providing the artistes with proper safety gear before the shoot. It is said that the police would also arrest a few of the crew members in connection with the incident.

Sandalwood mourns
Senior actors, technicians and film personalities expressed shock over the tragic incident. Majority of them felt that ‘unplanned’ shooting without proper precautions could have led to the incident.

From auto driver to actor…
Raghava Uday, who was an auto driver shot to fame as an actor with the film Jayammana Maga starring Duniya Vijay in the lead. A close friend of Vijay ever since, he had a rapid rise in popularity and was seen in most of the recent big films including Nagarahavu, Santu Straighforward and Dodmane Hudga.

Anil was a childhood friend of Vijay and was the right-hand man of Duniya Viay. He has acted in almost all films of Duniya Vijay and is also the president of the Duniya Vijay’s fans club. He s now survived by his wife, two children, family members and relatives. 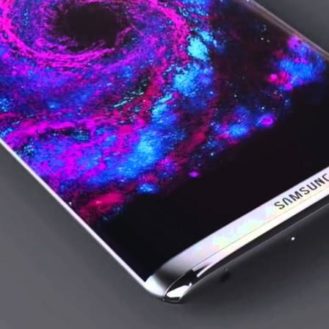 Galaxy S8 concept image (Image: YouTube) Putting an end to days of speculations which have been building around the Samsung’s next flagship, the Galaxy S8,…

When the world rejoiced as another year began, the police were engaged in their duties, ensuring safety in the city. But, they too had their…