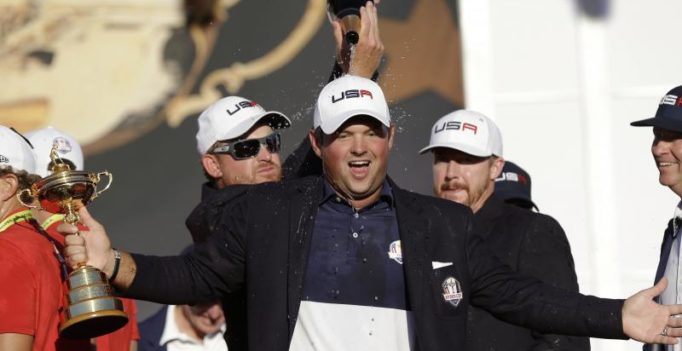 The Americans had dropped six of the past seven and eight of the past 10 in the rivalry. (Photo: AP)

Chaska: Shaking off three consecutive defeats, the United States recaptured the Ryder Cup on Sunday, ripping Europe 17-11 for their most decisive triumph since 1981 in the biennial team golf showdown.

Cup newcomer Ryan Moore, selected with a captain’s pick only a week earlier, won the last three holes to defeat England’s Lee Westwood 1-up and secure the trophy by giving the Americans an unbeatable edge in a tension-packed test at Hazeltine.

“To score the clinching point in the Ryder Cup is just incredible,” Moore said.

“I can’t digest what just happened. I was trying my hardest not to let my team down.”

Moore was 2-down before an eagle at 16, birdie at 17 and conceded par at 18, admitting, “I just wanted to hit a couple of good shots coming in.”

Earlier singles triumphs by Patrick Reed, Rickie Fowler, Brandt Snedeker and rookie Brooks Koepka plus a vital half point from Phil Mickelson had put the US team on the brink.

“We’ve got a memory and life experience that we will cherish forever,” said Mickelson, who made 10 birdies in halving with Spain’s Sergio Garcia.

US captain Davis Love, the 2012 captain whose team suffered its greatest collapse in Ryder Cup history to fall, and the task force that spent two years revamping the US Cup program saw their effort rewarded.

“I’m just proud of these guys,” Love said. “They had pressure on them for the last two years. I’m proud of every one of them. Unbelievable golf.”

The “Miracle at Medinah” was still on the minds of many as the US began putting the painful loss deeper into the past.

“We did this for our captain. He had a tough go four years ago,” said US star Jordan Spieth.

“We’ve been criticized for eight or 10 years for not coming together,” Love said.

“I’m so proud of them. We were kicked around for so long. You realize you have to do something.”

But they were already talking about defending the trophy in France in 2018.

“Hopefully there’s a change in the Ryder Cup,” Spieth said. “We’re looking forward to going to Paris and trying to win one over there.”

“They put up a massive fight. Some of the shotmaking was out of this world. The Americans putted that little bit better and that made the difference.”

Love’s captain’s picks went 7-6 while Clarke’s went 5-7, Belgian Thomas Pieters a record 4-1 but Westwood and Martin Kaymer each 0-3 until Kaymer’s singles win after the Cup was lost

Six Europe rookies were 7-9 overall while two US newcomers went 5-2.

Spectators were so insulting to European players the first two days at Hazeltine that the PGA of America issued a statement Sunday reminding of ejections for obscene remarks.

“We want everyone to play well. We want to beat each other at our best.”

All square at the eighth hole, McIlroy sank a 50-foot birdie putt, cupped his hand to his ear hollering “I can’t hear you.” Reed answered with a 25-foot birdie to halve the hole, wagged a finger at McIlroy and they shared fist bumps, laughs and pats on the back.

Reed took his first lead with a 10-foot par putt at the 12th and went 2-up with his first birdie in eight holes at the par-5 16th. Reed chipped across the par-3 17th green and lost the hole with a bogey, but sank a five-foot birdie putt on 18 to win.

British Open champion Henrik Stenson downed Spieth 3 and 2. Stenson won on 16 when Spieth stepped in a water hazard and his ball moved, prompting him to surrender the hole and the match.

Pieters beat J.B. Holmes 3 and 2, becoming the first Europe rookie to take four points and the first rookie to play five matches since American Larry Nelson was 5-0 in 1979.

“I thought I did pretty well,” Pieters said.

Fowler birdied to win the 16th and parred the last two holes for a 1-up win over Olympic champion Justin Rose of England and Mickelson made 10 birdies in nudging the Americans closer by halving with Sergio Garcia. 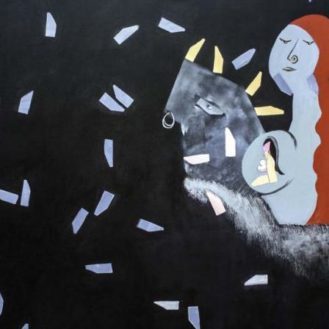