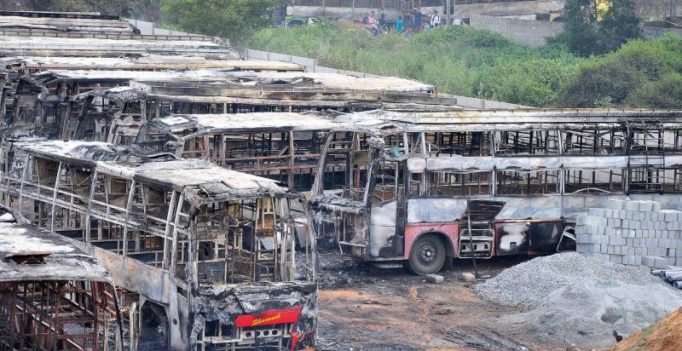 Charred buses at KPN’s yard in the city. More than 40 buses were burnt.

BENGALURU: The number of deaths due to violent protests in the city rose to two, with a 32-year-old man succumbing to injuries at a hospital. The deceased has been identified as Kumar, a bar bender by profession and a resident of Kempegowda Nagar in Byadarahalli on Magadi Road. He hailed from Kalkere village in Magadi taluk.

During the violent protests on Monday night at Kemegowda Nagar, the police resorted to lathi charge to disperse the mob. Meanwhile, Kumar, who was reportedly returning home, tried to escape from the police and entered a building along with a few other people.

As the police chased them up, Kumar went up to the third floor, from where he accidentally fell. He sustained multiple fractures and injury in the spinal cord. It is said that he remained on the ground for over an hour without medical aid.

His family members alleged that only an hour after the incident, the police shifted him to a hospital. Later, he was shifted to Sri Lakshmi Multi Speciality Hospital in Sunkadakatte, where he succumbed around 1 pm on Tuesday. Following his death, his family members and relatives staged a protest in front of the hospital demanding compensation.

Kumaraswamy, a relative, alleged that the police had killed him and action should be initiated against them. “Kumar has a three year old daughter while his wife Manjula is pregnant,” he added.

Later, the body was shifted to Victoria, where the post mortem was held. His family members took the body to his native for final rites. The government announced a compensation of Rs 5 lakh to him while Bengaluru Rural MP D. K. Suresh announced Rs 2 lakh compensation. The family members of Umesh, the 25-year-old man who died in police firing at Hegganahalli on Monday, have lost the sole bread winner of the family.

Cops urge TV channels to exercise restraint
A few hours after the Ministry of Information and Broadcasting issued an advisory on Tuesday noon asking electronic media to report on the ongoing Cauvery crisis only after “proper verifications of facts”, and exercise “caution and restraint” in national interest, the Bengaluru city police commissioner N.S. Megharikh on Tuesday night issued another advisory to the media houses warning them not to indulge in airing footage of violent incidents.

The advisory read, “Whereas it has come to the notice of the Commissioner of Police Bengaluru City that in the wake of recent incidents related to Cauvery water dispute, certain TV channels have been telecasting provocative and inflammatory news/programmes. Some TV channels have also been airing footage of violent incidents, rioting etc. repeatedly. These could further ignite tensions and reactions and could cause the law and order situation in the city of Bengaluru to deteriorate. It is felt that News, views or comments relating to Cauvery water dispute should be telecast only after proper verification of facts and presented with due caution and restraint in a manner which is in the public interest for maintaining harmony.”

The senior police officer called for restraint while covering incidents of violence and rioting, not carry news in such a way that it incites violence, telecast of live or file shots of violence or rioting may be avoided. Reportage may use shots of Cauvery river and security forces and while reporting the incidents, care may be exercised in choice of words.

Man goes missing while returning from Ramanagara
While the city was reeling under protest on Monday, a 46-year-old man, identified as Chandrashekar, went missing from Krishna Smriti Kalyana Mantapa in Ramanagara Town. It is learnt that the family has filed a missing complaint with Bannerghatta police on Tuesday and a separate complaint was registered with Ramanagara police.

Chandrashekhar had sent his family in car from Ramanagar to Bengaluru and told them he would reach by bus. However there was no news of him since Monday afternoon. According to unconfirmed sources, Chandrashekhar was reportedly arrested by the police.

The family is still waiting for his return and have also posted messages on social media about Chandrashekhar on Tuesday.  His daughter Rachana, a resident of Bannerghatta Road, told DC, “We had come to Ramanagar to attend a wedding and were scheduled to return to the city on Monday. As there was no space in the car, my father opted to come by bus. We left around 2.30 pm on Monday and since then he went incommunicado. After a frantic search we registered missing complaint both in Bannerghatta police station and in Ramanagar Town police station as well.”

Good Samaritans help stranded, those in need of food
Good Samaritans in the city pitched in by helping those stranded at bus stands and those facing difficulties in finding food. Mohan Shivanand, a builder by profession, helped about a fifty people at bus stands reach their destination.

For many who got stranded due to bandh, they provided the much needed relief. R.P. Gautam, a native of Kolar, got stuck at Hoskote on Tuesday and was unable to reach his home at Bommanahalli.

He came across a social media post mentioning Mohan’s contact number. He got in touch with him and within 30 minutes he was picked up and dropped at his house via M.G. Road. “Without him, I really don’t know what I would have done. Not even my friends showed up, no one helped, except him. I even considered going back to Kolar as I was stranded,” he said.

Pratik Saraf got stranded in his room in Whitefield, with no food and water, on Monday. Another Samaritan Rafael Elvin came to him with a freshly cooked meal and enough water for the day.

“He brought me a box of methi parathas and two big jars of water. I couldn’t believe that people can actually be that selfless. Had it not been for him, I would have to go hungry.” he said.

At a time when the city was torn apart by violence and protests, some citizens have taken it upon themselves to provide help to citizens who are facing difficulties due to the unexpected bandh like situation. They are supplying the needy with food, basic groceries and drinking water and helping the stranded commuters reach home.

“Since I’ve grown up here and also work here, I know a lot of people. I decided to use those contacts and help people in distress because of the bandh,” said Sivanand. 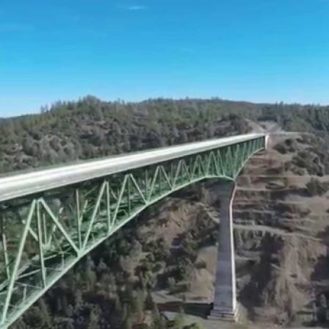