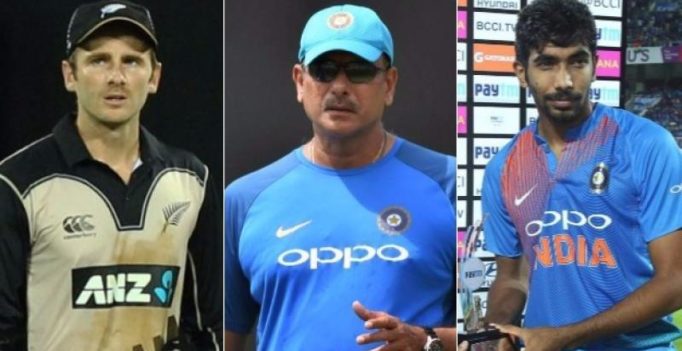 india’s victory would not have been possible without the Men in Blue’s dynamism and energy on the field, which head coach Ravi Shastri hailed after the match. (Photo: BCCI/PTI)

Thiruvananthapuram: India wrapped up the Twenty20 series against New Zealand in style by clinching a thrilling six-run victory in the series decider at the Greenfield International Stadium on Tuesday.

After Kane Williamson’s side won the toss in a rain-curtailed contest, the hosts were restricted to 67-5 in 8 overs. However, in reply, India’s new-ball pair of Bhuvneshwar Kumar and Jasprit Bumrah got the better of the Kiwi batsmen as Virat Kohli’s Team India ran out as comfortable winners in the end.

However, it would not have been possible without the Men in Blue’s dynamism and energy on the field, which head coach Ravi Shastri hailed after the match.

“You’ll be lying if you say you aren’t tense. Such games can change in the matter of 2-3 balls. Boys saved the best for last in terms of fielding. There was electricity on the field. We thought we could defend it,” Shastri said after the match.

Winning the toss, the Black Caps were in the contest after Tim Southee and Ish Sodhi impressed with the ball in the first innings, on a wicket that offered very little assistance to the batsmen.

“This was a good win because it was against a very good side. I must say, this side can go places. New Zealand, they play well as a unit and they competed excellently, “ Shastri added.

Shastri also praised the bowling efforts of his team and had some words of praises for Jasprit Bumrah, who bagged the man-of-the-match and also the man-of-the-series awards.

“After we lost a couple of wickets, our aim was to get 65. By no means, it’s a match-winning score, but if you field well and start well, the pressure is on the opposition. Outstanding temperament from Bumrah. He’s shown he’s got all the tools of the trade. But importantly, what he’s shown that he’s a thinking bowler,” Shastri signed off.