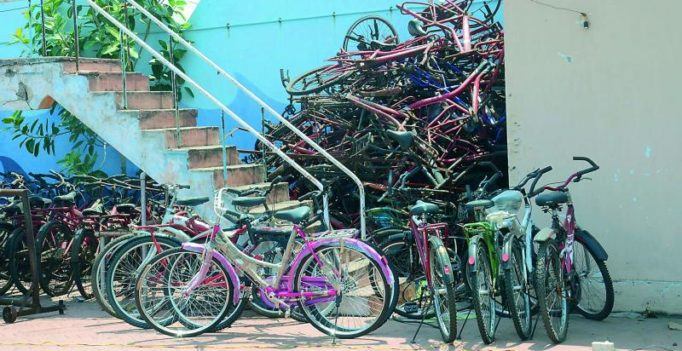 Damaged parts of the bicycles were kept aside for scrap sale, at GVMC aqua complex on the beach road in Visakhapatnam on Thursday. (Photo: DC)

Visakhapatnam: The plans of the local civic body to check pollution and usher in fitness among people by promoting the use of cycles has taken a backseat. In 2012, the Greater Visakha Municipal Corporation (GVMC) launched a cycle club. Many business and voluntary organisations joined the initiative and donated about 300 cycles to the club. The cycles are given to people free of cost to use on RK Beach Road and, from YSR Park to RTC complex, from 6 am to 8 am.

However, owing to lack of regular repair and maintenance, the cycles are now ready to be disposed of as scrap. M. Rakesh, who regularly cycles on the Beach Road using the cycles of the club, said that the bad condition of the cycles is discouraging people from using them, despite their availability free of cost. Many people are unaware of the cycle facility because of lack of publicity, he added.

M. Jagadish Kumar, general secretary of India Youth For Society, which recently availed permission from the state government to form Visakhapatnam District Cycling Association said, “People would love to use the cycles of the club if they are in good condition. Besides, special cycle tracks would help as long as they are not encroached by vendors or used as parking space like the footpath area has become.”

Denying the allegations, the supervisor of the cycle club at Aquatic Sports Complex, Mr Bobby said, “the cycles were bought in 2012 and were maintained properly. However, the cycles get rusted easily due to the salty air of the beach.” Even as the old cycles are not being taken care of properly, another 100 cycles have been procured and would be made available to the public from August 31.

In 2012, when B. Ramanjaneyulu was the GVMC commissioner, the corporation had proposed cycle clubs in every ward of the city and resolved to ensure special track for cyclists on the BRT corridor. However, the plans did not see the light of day. Some youngsters said that the city should lay special cycle tracks on the road and reduce the use of motorbikes so that cyclists feel safe. 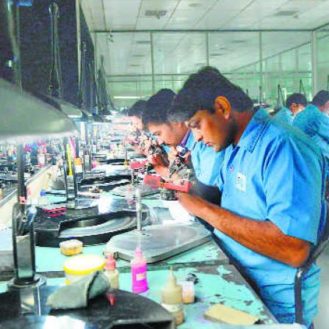