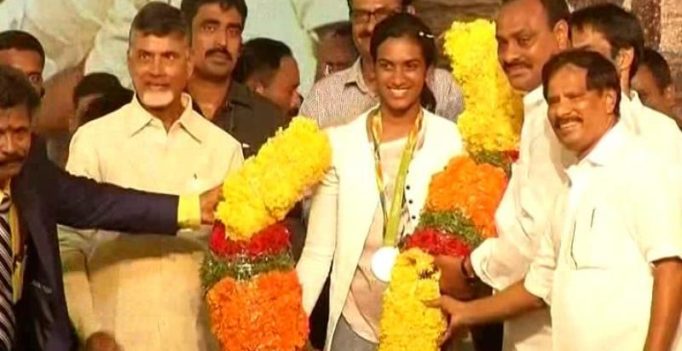 Vijayawada: Olympic silver medallist in women’s badminton, PV Sindhu, was felicitated by the Andhra Pradesh government on Tuesday, a day after a grand welcome was according to her by the Telangana government.

On Tuesday, Sindhu participated in a victory rally from Gannavaram Airport to Indira Gandhi Stadium in Vijayawada, where the felicitation took place.

Vijayawada member of parliament, Kesineni Nani of the Telugu Desam Party, who made arrangements for the rally, had arranged for the special flight and travelled with Sindhu, her coach and their families.

Large number of students and fans were lined up on either side of the road to welcome Sindhu as she emerged from Gannavaram Airport.

Standing in a specially decorated open-top bus along with her coach Pullela Gopichand, parents and some ministers of Andhra Pradesh, Sindhu waved at the huge crowd. She kept displaying her Olympic medal proudly.

After the civic reception, Naidu presented her a Rs 3 crore cheque. Naidu has also announced a 1,000 square feet residential plot in Amaravati for Sindhu.

Sindhu and Gopichand will also take a holy dip in Krishna river on the last day of 12-day long river festival “Krishna Pushkaralu”.

Sindhu, who returned from Rio to Hyderabad to a hero’s welcome on Monday, received another cheque of Rs 5 crore from Telangana Chief Minister K Chandrasekhar Rao, who also offered her a residential plot in Hyderabad and a government job.

On Monday, it was reported that the country’s highest sporting award — the Rajiv Gandhi Khel Ratna — will be conferred on four athletes with Olympic medallists P.V. Sindhu and Sakshi Malik set to be honoured alongside trail-blazing gymnast Dipa Karmakar and ace shooter Jitu Rai.

While shuttler Sindhu created history by becoming the first woman athlete from India to grab a silver in the Rio Olympics, Sakshi bagged a bronze in the 58kg wrestling. Dipa missed the bronze by 0.15 points but her clean finish in Produnova vault won the hearts of the nation. 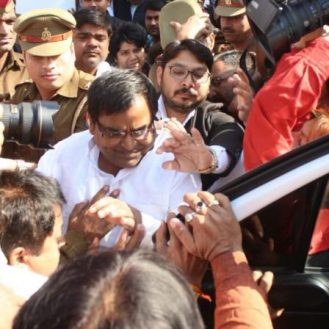