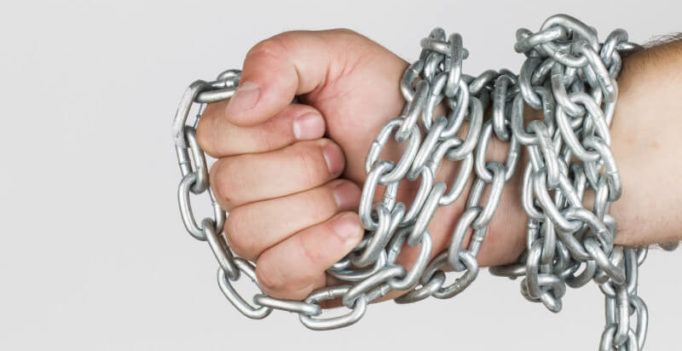 Let’s say you have a manual penalty… not a nice way to open a post, I know, but it’s the reality for many site owners.

What if Google shows you an example of one of your problematic links, and it’s one that sends you some really great converting traffic?

What if, upon conducting a link audit, find that some of the “sketchy” links are ones that were editorially given?

For example, here are a few of the pages linking to my site that get identified as being “dangerous” inbound links:

One of my biggest sources for client referrals is this very site. It’s a high authority site that’s well respected, yet it gets flagged for me. Those links definitely send me converting traffic.

I know it’s a tool and not a human that flagged them, but what if Google penalized my site and used these as examples of manipulative links? Stranger things have happened.

What if you get dinged for comment and forum links, even though those were generated naturally due to your industry and community?

Here’s one of my biggest problems with links: What is natural and positive for users may be what sinks your rankings. That’s true for several reasons, but most notably the following two:

The Problem With “Natural” Links

Question: How can you figure out what type of links Google will think are natural, good links for your site, specifically?

I’m not sure you can.

I’ve used this example before, but here it is again:

A quotes site was penalized for the links it generated from people in forums and comments using quotes (and links to the quotes site) in their signatures.

Think about that for a minute.

Yes, we know that optimized links in comments and forums are bad now. Here’s what Google (currently) says about forum links:

Think about this comment re-worded with no spammy link drop, though. For example:

Maybe some people just like to use quotes in their signatures, right?

In my opinion, that’s not a bad link. It’s a link in a signature, and you’ll find these types of links everywhere. People use them in their emails, in forums, when they comment on other sites, and on social media.

To me, that says that these people find some sort of benefit in your site. Isn’t that the whole purpose of Google? To serve up what people actually want?

With regard to comment links, we have this nugget from Google’s Webmaster guidelines on when you might want to nofollow a link:

Untrusted content: If you can’t or don’t want to vouch for the content of pages you link to from your site — for example, untrusted user comments or guestbook entries — you should nofollow those links. This can discourage spammers from targeting your site, and will help keep your site from inadvertently passing PageRank to bad neighborhoods on the web. In particular, comment spammers may decide not to target a specific content management system or blog service if they can see that untrusted links in that service are nofollowed. If you want to recognize and reward trustworthy contributors, you could decide to automatically or manually remove the nofollow attribute on links posted by members or users who have consistently made high-quality contributions over time.

Here’s the part that worries me about that policy:

“If you want to recognize and reward trustworthy contributors, you could decide to automatically or manually remove the nofollow attribute on links posted by members or users who have consistently made high-quality contributions over time.”

It all sounds kind of vague and, like many things, way too open to being interpreted differently by Google than by us. When they say, “you could,” it’s not clear what you should do in order to escape trouble.

What if a user has only commented once or twice and you decide that this person is legitimate, the links he has dropped are totally relevant to the discussion, and I’m going to follow those links? Is that a problem for either your site or the sites that are being linked to? Who can give a 100% accurate answer on that one?

Back To The Quotes Site…

When I did the link audit of that site, there were three reasons why I was worried, not counting the fact that he did have a manual penalty:

Now, why should those links need to be cleaned up or disavowed or even nofollowed? They were relevant links, none of which he asked for, paid for, or pursued in any way other than by simply having a linkworthy site.

They helped him rank, of course, but only in a very organic way…the way it’s all supposed to happen.

This is an outlier case, definitely — but it does make you think, doesn’t it?

What Can You Do?

There was a great comment on another article that I wrote that said this:

Google’s inability to differentiate natural vs. unnatural links from comments/forums is their fault but your loss.

Nothing about this seems fair to me. Yes, I know that those links technically violate Google’s current guidelines, but the anchors don’t really seem optimized to me as they were mostly either the quotes themselves or the author of the quotes.

The webmaster didn’t build the links. He just built a great and useful site… but he got penalized for it.

Well-known SEO Debra Mastaler had this to say in a recent interview:

Widgets and badges are a great branding tool and way to show expertise for a site and yet, I can’t benefit algorithmically for fear of being dinged for Terms of Services violations. Doesn’t make sense.

What does that say to you about any given link?

How can you accurately predict what Google will flag and, even more importantly, how can you decide what to do about good-for-you links when they do get flagged? It’s that very question that makes my skin crawl when I see SEOs writing about “penalty-proof” link tactics.

There are less risky link building tactics, sure — but that’s about as much of a guarantee as anyone can give you these days.

So, what are your options?

Go And Nofollow Any Link Identified As Being Potentially Dangerous — Even The Good Ones?

That takes a lot of time and labor.

Ask For These Links To Be Removed?

You’d lose qualified traffic — and once your penalty is lifted, you’d also likely find yourself without any links to help you rank.

That seems like a crappy thing to do to a site that is sending you relevant traffic, as it suggests that the site isn’t trustworthy.

I’ve seen examples of unnatural links that Google have given to webmasters under penalties. They aren’t all spammy paid links like you might think. I have a pretty good eye for paid links, and I’ve seen some examples that I feel confident saying are in no way even close to being paid links.

In fact, I’ve seen some where I have no clue what violation they’re guilty of as it’s just not obvious; yet, they got flagged.

What Is A Webmaster To Do?

What would you do?

How To Take Screenshots Of VirtualBox VMs

VirtualBox is a great virtualization solution, however if lacks one big feature: the ability to take screenshots of a virtual machine. Of course, you can…

How to install libwsutil-dev on Debian Unstable (Sid)

Link building is a technical and nuanced practice that is difficult to do well. Building real links requires manual effort, dedication and no shortage of…

How to install r-bioc-summarizedexperiment on Debian Unstable (Sid)

How to install libopenexr22 on Debian Unstable (Sid)

How to install openhpid on Debian Unstable (Sid)

How to install libosgearthsymbology5 on Debian Unstable (Sid)

How to install python3-zope.i18n on Debian Unstable (Sid)

How to install libpng-sixlegs-java on Debian Unstable (Sid)

How to install python3-pyroma on Debian Unstable (Sid)

How to install postgresql-mysql-fdw-doc on Debian Unstable (Sid)

How to install libtelepathy-logger-qt4-dev on Debian Unstable (Sid)

How to install thc-ipv6 on Debian Unstable (Sid)

How to install python3-tooz on Debian Unstable (Sid)

How to install LiteSpeed web server on CentOS 7

How to install libjs-jquery-nicescroll on Debian Unstable (Sid)

How to install libopendkim-dev on Debian Unstable (Sid)

How to install volumeicon-alsa on Debian Unstable (Sid)

How to install vsearch on Debian Unstable (Sid)

How to install prelude-manager on Debian Unstable (Sid)

How to install octave-general on Debian Unstable (Sid)