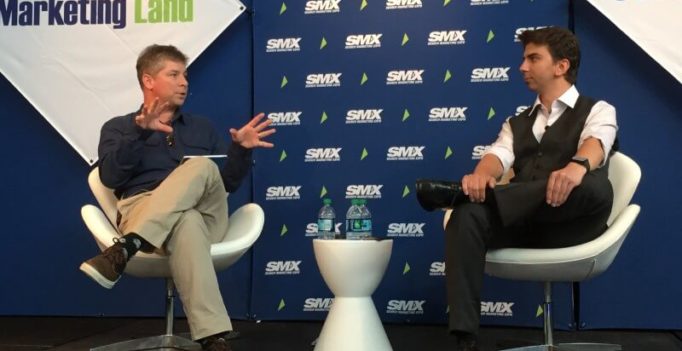 Day one of our SMX Advanced conference is wrapping up with an annual tradition: a keynote conversation with Google covering a variety of SEO and SEO-related issues of great concern to webmasters and businesses of all sizes.

But this year’s keynote has one notable difference: It’s the first year without the involvement of Matt Cutts, the former head of Google’s web spam team who’s now on leave from the company. We’ll miss Matt, but we’re happy to have Google Webmaster Trends Analyst Gary Illyes with us tonight — you should recognize Gary’s name because he’s spoken at a number of recent SMX conferences and been active in answering webmaster (and media) questions.

He’ll be speaking with Search Engine Land’s founding editor, Danny Sullivan, starting at 5:00 pm PT, and I’ll be doing my best to live blog the entire conversation right here. So, if you’re not on-site with us in Seattle, get comfortable and join me in about 15 minutes as our keynote coverage begins.

Okay, it’s a little after 5 pm and we’re getting started. Danny solemnly tells the audience we’re gonna take a moment to remember someone, pauses, and then a short photo collage of Matt Cutts shows on the video screens. Audience applauds when it comes to an end. (I think they’re applauding Matt, not that it’s over. #rimshot)

Below, I’ll use “DS” for Danny’s comments and “GI” for Gary’s comments.

DS: Let’s start with an easy one. So what’s going on with Panda and Penguin?

GI: There will be a Panda update in the next 2-4 weeks. I don’t want to set an expectation for the team that they can’t meet, but there will be a data refresh coming soon.

Penguin … that’s a hard one. We’re working to make it update continuously, but that’s a huge update. It’s months away. We have to change many things.

DS: Panda – are we still working toward a one month, every couple months update schedule?

GI: Our goal is to update it more often. It’s not that easy to refresh Panda that often, we have to get our data right to do a data refresh. But sometimes the data is noisy or something’s wrong with the data, so we have to wait.

DS: Will one be more frequent than the other?

GI: The goal is to get Penguin to be updated continuously. But Panda, for the foreseeable future, will be manually updated.

DS: What was that “Google penalty server” we saw on John Mueller’s laptop screenshot?

GI: Yes, we have a tool that lets us see people’s penalties.

DS: Can we get to a point where we know more about when penalties are applied?

GI: We are working to be more transparent about what we’re doing. A while ago, we did a monthly blog post with all of the updates we were working on, but it was confusing. People focused on all the wrong things. People tried to take apart what we said and outsmart the algorithms, but it doesn’t work.

(A funny exchange about how updates are named ensues. Danny explains how we always ask Google for a name, but if they don’t give us one, Search Engine Land names them … for better or worse. He tells how we almost called the Pigeon update “Titanic.”)

GI: Says he’d like to be more transparent about future launches. Like, if Google were to do a ranking update around hacked sites, he would want that to be pre-announced.

DS: Last month, we had the Quality Update.

GI: Historically, we don’t actually confirm those core ranking changes. There’s not much we can say about it. We don’t want to leak stuff that would hurt us short-term or long-term.

DS: How is Google assessing the quality of websites and can you detail all of the signals? (laughs)

GI: So this morning when I woke up, I decided that I want to lose my job. (more laughs)

DS: What about click-thru rate? We know you track what people click on.

GI: Using clicks directly in ranking doesn’t make too much sense because of the noise.

GI: I have no idea how mobilegeddon is going, but the mobile-friendly update was a success. (laughs)

GI: The number of URLs and the number of search queries affected was way bigger than Panda and Penguin combined. I think we should have explained that. Sites actually did switch [to being mobile friendly] right before it happened — the number of sites affected decreased dramatically from what we expected.

DS: App indexing. It feels like we’re getting to a place where, “no app, no need to apply.” You encourage people to interact with apps, but you don’t let them interact with an email signup form or a Facebook like button. Does everyone need an app now?

GI: Apps aren’t for everyone. If you have an informational site you may not need one. But if you’re a car dealer, you want people to search your cars and an app would do that. We want to present users another way to consume content, and if they like it, they can install an app to do that.

DS: Direct answers — seems like they’re showing up more. Will they eat all the other results? Is SEO dead?

GI: SEO isn’t dead. SEO is good for users, except in cases where people to try to game stuff with stupid crap. Direct answers, we call them feature snippets.

DS: Some people like the direct answers – they get traffic. Can you tell how much traffic you send to websites from those?

GI: I don’t know that. It can be extremely helpful for a site to have featured snippets. It can send traffic to your site when we don’t give a complete answer. Users have a sense that they’ll get the answer on your page. Another benefit is branding — but that’s hard to measure.

DS: If we’re picked for a featured snippet, is that a sign of trust? That we’re more authoritative?

GI: It means your site provides an answer to that user query. That’s it.

DS: Is there an opt-out?

GI: The nosnippet meta tag, but that stops all of your snippets from showing up.

DS: Entities — Google knows if you’re a business or a brand. How strong a signal is this versus links?

GI: If there’s no structured data, then it’s really difficult. Our crawler will try to interpret anything as a link for discovery that looks like a link. If you have kreationnext.com, we would look on that as a no-followed link. We would use it for discovery, but the mention wouldn’t pass PageRank.

DS: You have tweets in search now. Will there be an SEO impact?

GI: To my knowledge, we’re not doing anything like that. We’re in the very early stages. In general, we want signals that are stable and not that noisy. When I say “stable,” I mean if Twitter were to close that firehose, it would create a problem. We need signals that are stable long-term, otherwise our rankings would be messed up.

(I missed question on AJAX crawling here. Gary reiterated what was announced recently. Says Google will soon have a blog post with recommendations when the AJAX change is in place.)

DS: Audience question about new global TLDs and if they matter for SEO.

GI: There’s no special benefit in them. They’re all treated the same.

(missed a couple questions here due to user/technical issues. sorry!)

DS: Does Google use user data from Chrome, Android, etc.?

GI: It’s like what I said about clicks. It’s extremely noisy.

DS: What about Google Analytics?

GI: We don’t use Google Analytics.

DS: Says there are numerous questions about duplicate content.

DS: So should people not worry about having two similar pages?

GI: I think there are better things to worry about. We can generally do a good job of figuring out which page is better. In general, we want to show one URL per piece of content.

DS: Will secure search have a bigger impact in the future?

GI: Yes. This is my area. I have plans to improve that and make it stronger.

DS: Are interstitials a problem? A lot of sites have overlays.

DS: What about authorship?

GI: I don’t want to say something stupid or wrong, but I think when we deprecated authorship — the inclusion of author photos in search results — we didn’t deprecate the whole concept of authorship.

The session continues with a discussion of quality, and how websites that serve users and offer content that gets shared — those are signs of quality.

DS: When will the emojis die in search results?

DS: You’re missing it! You should have animated GIFs, too!

GI: We do, in the knowledge panels.

And with that, the session is over. Thanks for following along.

How to install python-releases on Debian Unstable (Sid)

How to install python3-pyudev on Debian Unstable (Sid)

In JSP, config is an implicit object of type ServletConfig. This object can be used to get initialization parameter for a particular JSP page. The…

How to install ruby-ox on Debian Unstable (Sid)

How to install libtestu01-0-dev-common on Debian Unstable (Sid)

How to install starvoyager on Debian Unstable (Sid)

How to install libzmq1 on Debian Unstable (Sid)

How to install python-shapely on Debian Unstable (Sid)

How to install nfqueue-bindings-python on Debian Unstable (Sid)

How to install orville-write on Debian Unstable (Sid)

How to install python3-barbicanclient on Debian Unstable (Sid)

How to install splint on Debian Unstable (Sid)

How to install python3-apt-dbg on Debian Unstable (Sid)

How to install python-twisted-mail on Debian Unstable (Sid)

How to install python-qtawesome-doc on Debian Unstable (Sid)

Google On The Buy Now Button: We Have No Intention To Be A Retailer

How to install gir1.2-urfkill-glib0 on Debian Unstable (Sid)

How to install openexr on Debian Unstable (Sid)

How to install python-opengm-doc on Debian Unstable (Sid)

How to install python3-libtrace on Debian Unstable (Sid)

How to install procinfo on Debian Unstable (Sid)